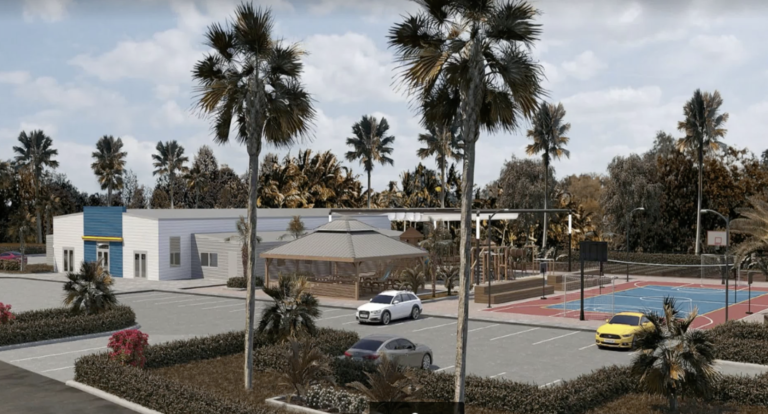 A rendering of the Central Abaco Community Centre/Hurricane Shelter expected to be completed by May 2021. (FILE PHOTO)

ABACO, BAHAMAS — The Central Abaco Community Centre/Hurricane Shelter is expected to be completed by May 2021, before the start of the next hurricane season, announced Prime Minister Dr Hubert Minnis today.

The prime minister and a delegation, including North Abaco MP Darren Henfield, South and Central Abaco MP James Albury, members of the Disaster Reconstruction Authority and donors for the project, were on the island for the official groundbreaking ceremony on Central Pines Drive, Abaco.

Construction of the facility will be paid for primarily by donor funding, through gift agreements in the amount of $1,750,000, according to Henfield.

Other committed funds in the amount of $75,000 are still being finalized. The overall cost of the facility is $1.8 million.

The donors for the project include the Bahamas Hope Foundation, Sol Relief and Ernst and Young.

“I know that this has been and continues to be a very difficult time for Abaco,” Minnis said.

“But things are improving because of the hard work, the resilience, the hope and the faithfulness of all of you and the people of Abaco.”

The prime minister noted that the facility will serve as a high-performance community center and storm shelter that will serve the communities of Greater Abaco for meetings, conferences, seminars, religious functions and other cultural events.

He said the building will also host after-school programming, a multi-purpose community and cultural center, community events,  four offices that will cross function as a command control room, a first aid room and an administration area and meeting rooms.

It will also include state-of-the-art playgrounds, a full-size basketball court, shaded gazebos, dining tables and a one-of-a-kind eco-community botanical garden.

Additionally, during a hurricane or any disaster, the Abaco Community Centre will convert into a shelter that can accommodate 800 people.

The prime minister noted the building is designed according to the Bahamas building code, with a wind rating of 180 miles per hour sustained and impact-resistant windows and glazing.

The facility also has appropriate storage spaces for hurricane supplies and provisions along with furnishings (chairs, tables, etc) for community usage and events and includes water-saving technology with backup storage to maintain operations for at least five days in the event of damage to the water supply infrastructure.

Minnis further advised that the government is in discussion with World Food Kitchen and other partners to provide technical assistance for the center, which will also act as a logistical and food distribution center.

Whilst under construction, the facility will be known as Abaco Community Centre/Hurricane Shelter. A naming competition will be launched with all schools on the island. The winning school will receive a prize of $10,000 to be used to benefit a sustainable program at that school.

The prime minister said that other shelters will be constructed on Abaco and Grand Bahama and the government will continue to support other buildings traditionally used as shelters.

He said the government has spent $6 million this summer doing repairs to a number of churches and schools in the northern Bahamas.