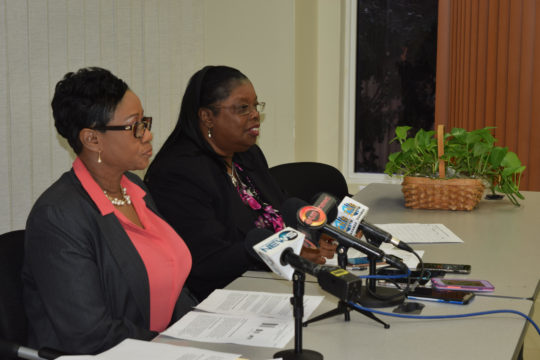 Statisticians released the latest Labour Force Survey, which shows that unemployment nationally rose marginally from 10 per cent in May 2018 to 10.7 per cent in November 2018. (PHOTO: Royston Jones Jr.)

NASSAU, BAHAMAS – Despite generally being more qualified than their counterparts, unemployment was higher among women than men between May 2018 and November 2018, according to the Labour Force Survey, which was released by the Department of Statistics yesterday.

According to the survey, the unemployment rate rose nationally from 10 per cent to 10.7 per cent during the six-month period.

While unemployment increased on New Providence, the rate of joblessness decreased on Grand Bahama and Abaco.

The unemployment rate for women reached 11.3 per cent in November 2018, compared to 10 per cent among men.

“Young women, those aged 15-24 and core-aged women, those aged 25 to 54, were more likely to be unemployed that their male counterparts,” Senior Statistician Cypreanna Winters said during a press conference at the Department of Statistics.

“By contrast, men aged 55 years and over were slightly more likely to be unemployed when compared with women in their same age cohort.”

When asked to expound on the reason women were more likely to be unemployed, Winters was not able to explain the disparity.

However, she said, “In another study, we saw that even [though] women were more qualified that men, yet their unemployment rate was higher.

“That’s in another study that we did that we’re still working on.”

“Similar patterns persist in The Bahamas, as youth unemployment for women was highest recorded for all age groups,” the Department of Statistics said.

“The unemployment rate for young women reached 24.1 per cent, compared with 22.4 per cent for young men.

There was also a greater number of women than men who fell into the category of discouraged workers.

This group accounts for people who have not looked for work because they believed no jobs were available in the labour market.