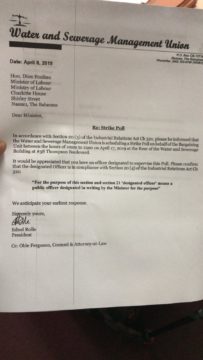 NASSAU, BAHAMAS – Having waited for the past four years for its Industrial Agreement to be executed, the Water and Sewerage Management Union announced on Wednesday that it has requested Minister of Labour Dion Foulkes to take a strike poll on behalf of its Bargaining Unit.

The announcement was made yesterday in a letter signed by Ednel Rolle, President of the manager’s union, and it was copied to the union’s attorney Obie Ferguson.

According to the letter issued to Foulkes, the union is hoping to hold the strike poll on April 17th between the hours of 10:00 a.m. to 11:00 a.m. at the rear of the Water & Sewerage building on Thompson Boulevard.

Yesterday, Rolle told Eyewitness News Online in a telephone interview that the union was forced to take a strike vote because they had been waiting for far too long to have their industrial agreement executed.

“It has been four years now,” Rolle said, adding that having met on several occasions to address the long standing issue, the union’s concerns continue to fall on deaf ears and the execution of an industrial agreement is long overdue.

Most recently, the Water and Sewerage  manager’s union compelled the Corporation to have the Royal Bahamas Police Force sweep WSC offices in New Providence, Abaco and Eleuthera for listening devices. The request came after union officials expressed that complaints had been lodged of conversations that were being recorded.

Director of Labour John Pinder told Eyewitness News Online earlier this week that executive management had agreed for authorities to visit the facility to sweep for hidden wireless devices.

Meanwhile, Obie Ferguson, leader of the Trade Union Congress (TUC), said the TUC is expected to hold a board meeting on Friday to discuss the proposed strike poll as well as the issues of other unions.

According to Ferguson, the TUC’s job is to represent the working people and they will do just that.

“If they are not being treated in a manner that is decent and respectable what are we suppose to do? Sit there and twiddle our thumbs and say, ‘well we don’t want to offend Mary or Harry’. That is not the role of a trade union,” Ferguson said.

The TUC president said the whole idea of Water and Sewerage having a strike vote is to ensure that matters are addressed.

He noted, however, that  while the Minister of Labour was served with a copy of a request to conduct a strike poll, he sees no reason why both parties cannot sit down and resolve matters.

“I mean being stubborn, hard-headed and intransigent, and believing you know everything and all those type of things, that is not going to help the process,” Ferguson stressed.

“You go into the negotiations with an open mind, look at the facts, and come to a reasonable conclusion.

“No one gets everything they want in negotiations. That is not negotiation, that is dictation and you can’t talk to trade union leaders like you are talking to your child.

“As a matter of fact, your child doesn’t allow that these days so therefore the attitude must change.”