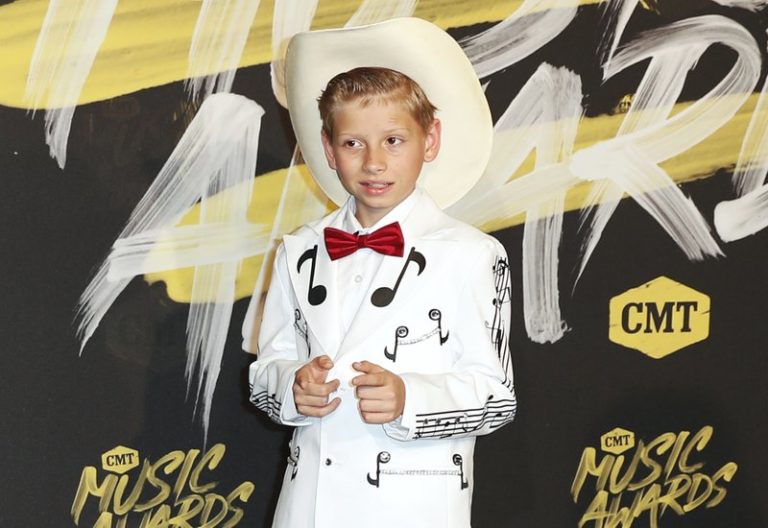 FILE - In this June 6, 2018, file photo, Mason Ramsey arrives at the CMT Music Awards at the Bridgestone Arena in Nashville, Tenn. Ramsey, a preteen Illinois boy who went viral online in a video of him singing and yodeling in a Walmart store is releasing his first album July 20. (AP Photo/Al Wagner, File)

NASHVILLE, Tenn. (AP) — It was only a matter of time, just a couple of months actually, before a preteen boy captured in a viral video yodeling in a Walmart put out a record.

Mason Ramsey, the adorable 11-year-old whose version of a Hank Williams classic has been watched more than 50 million times on YouTube and spawned multiple remixes, will put out his first album on July 20.

Titled “Famous,” the EP includes a mix of new songs and country classics, including the song that made Mason an overnight Internet sensation, “Lovesick Blues.”

Raised in the small town of Golconda, Illinois, Ramsey said his grandfather taught him to sing when he was 3 years old and he started performing at nursing homes, restaurants and fairs. “When I started to sing, I guess you could say it was good for a 3-year-old,” Ramsey said in a telephone interview.

But it took him weeks to discover that his impromptu Walmart performance had gone viral because his family didn’t have Internet access at their home. They got a call from producers with “The Ellen Show,” and he was flown to Los Angeles — his first-ever plane ride — to be a guest on the show.

Ramsey signed a record deal with Big Loud Records and Atlantic Records, and he’s been popping up everywhere, from Coachella, Stagecoach and the Grand Ole Opry. He will be opening for Florida Georgia Line at their Las Vegas residency later this year.

His six-song EP includes covers of other Williams tunes including, “Jambalaya (On the Bayou)” and “I Saw the Light,” and his single, “Famous,” which was co-written by Florida Georgia Line’s Tyler Hubbard. Ramsey said he warned producer Joey Moi not to use any effects on his vocals for the record because he said the effects “make you sound like a robot.”

Throughout all the excitement of the last few months, Ramsey said his main goal is to keep performing until he’s an old man.

“Fame is a good thing, but you have to use it in good ways,” Ramsey said. “Fame is a thing where people can overdo it and get a big head. Most of all family is more important than anything.”

This article was written by KRISTIN HALL, Associated Press writer.