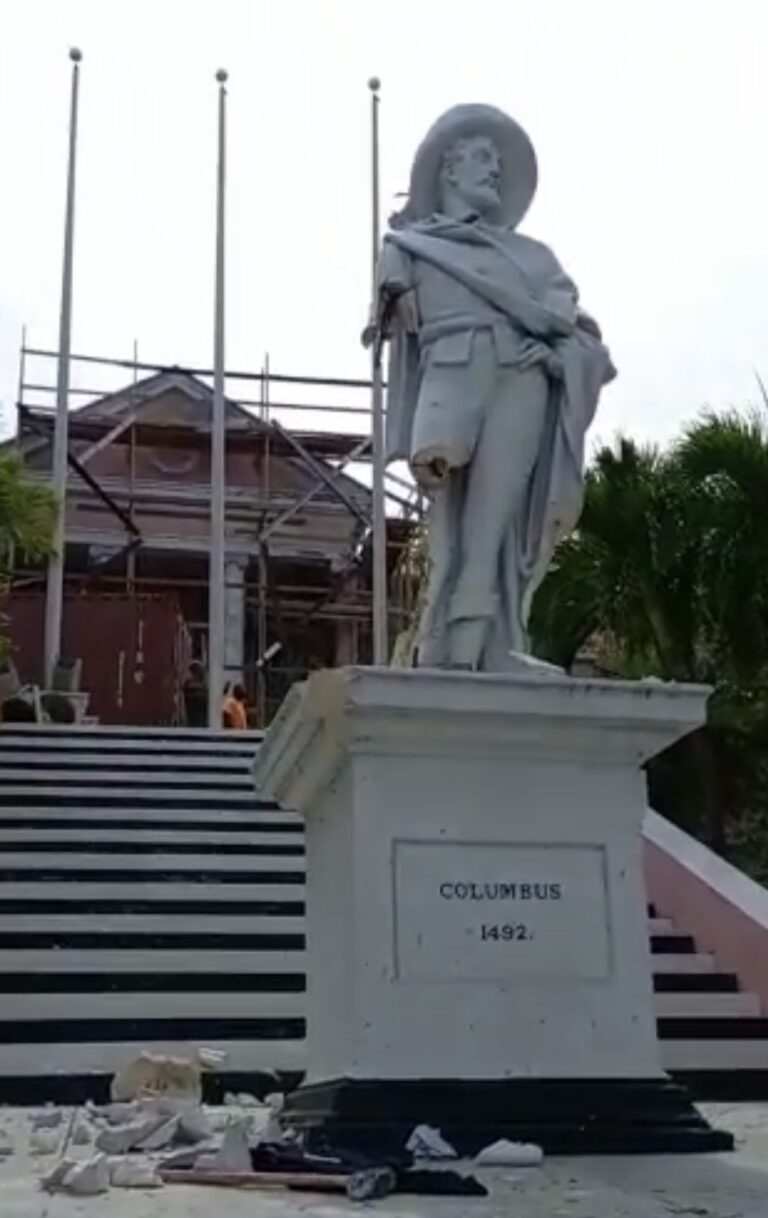 The Christopher Columbus statue at Government House after a man allegedly used a sledgehammer to partially tear it down on Saturday, October 9, 2021.

PM expects those responsible for damage to be lawfully dealt with

NASSAU, BAHAMAS — Prime Minister Philip Brave Davis said yesterday that he empathizes with those who would wish for the reminders of The Bahamas’ colonial past to be removed, but civil disobedience and destruction of public property cannot be condoned.

On Saturday, a man who referred to himself as “Michael the Archangel” was arrested after he allegedly used a sledgehammer to damage the right leg of the Columbus statue while shouting at the figure: “You destroyed this land; I’ve come to take this [expletive] back.”

Yesterday, the prime minister said he expects the individual to be dealt with in accordance to the law.

As to the replacement of the statue, Davis said the matter will be discussed at the Cabinet level.

“I am always concerned when I see acts of disobedience that result in destruction of public property,” he said following a National Heroes Day ceremony where 16 Bahamians were honored.

“Whatever the historical significance and protest that has come from it in respect to Columbus’ presence or encounter with The Bahamas, that’s one issue.

“In fact, I sympathize and empathize with some of the voices that are speaking to the fact of realigning history so its true facts are revealed and interpreted.

“So, I do share and understand some of the sentiments, but this is not the way to express those sentiments by destruction of public property.

“We do not condone it and we expect the persons responsible will be [dealt with] in accordance with the law. Insofar as to whether we replace it, that’s another issue.

“We’ll have a discussion on that at the Cabinet level and decide what we do going forward.

“There is a loud cry for us to ensure that our history is properly represented, particularly as it relates to the African diaspora.”

In a live update on Facebook, Attorney Maria Daxon, who claimed to have spoken to Shervandaze Smith who is in custody at the Central Detective Unit, said he is in good spirits and believes he acted on the Bahamian people’s behalf.

It remains to be seen if the man will be charged.

What he did was a disgrace. No if but’s . Total disgrace.

The only criminal in this situation is Columbus. What Columbus did was a total disgrace. The indigenous people would be very proud of Mr.Smith