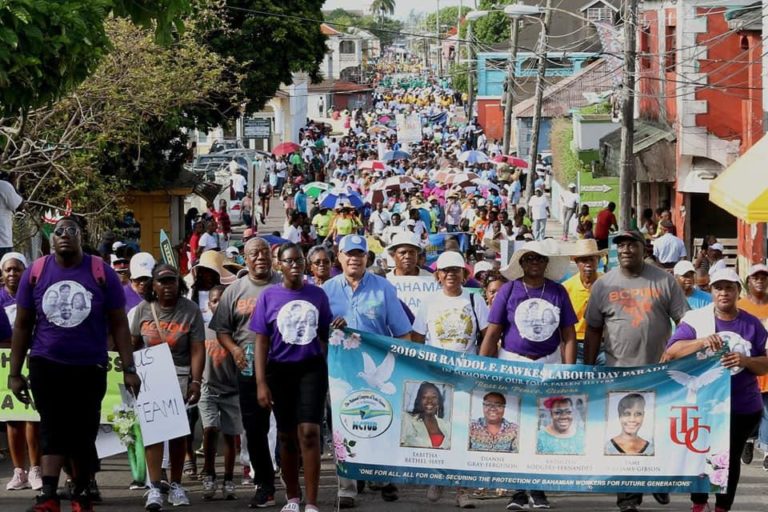 Wreaths laid at foot of plaque recognizing the four females who lost their lives at last year’s parade.

NASSAU, BAHAMAS – Although the 2019 Labour Day Parade was solemn for many participants, union leaders remained committed to their cause and utilized Friday’s march to speak of failed negotiations and the poor working conditions of many Bahamians.

According to Bernard Evans, President of the National Congress of Trade Unions (NCTU), labour in The Bahamas is “under attack” and the economic gap is growing between the wealthy and the poor.

“We are finding out now that employers are seemingly employing very very very smart litigators to try and roll back benefits gained over decades and decades.”

Sharing the same sentiments were Trade Union Congress President, Obie Ferguson, who said the lack of respect shown towards labour unions is the central issue.

“There is absolutely no respect for the labour movement. The public corporations and the private sector – they are all opposed to respecting the trade unions,” Ferguson claimed.

“And the difficulty we have is the system. We have the regulator being the enforcer, that’s conflict. You can’t regulate me and also be the one to enforce.”

Also, at yesterday’s march, countless concerns emerged amongst citizens regarding whether or not the current administration is sticking to their word about being labour-friendly.

Eyewitness News Online spoke with Minister of Labour, Dion Foulkes, who said that the government remains committed to addressing the unions’ concerns.

“We are very friendly to the labour movement. We have total commitment to the principle protection of workers’ rights in the country,” Foulkes said.

“I find that once there is conversation and constant dialogue, normally there is a conclusion that both parties can live with.”

Nonetheless, there still remains an insurmountable amount of pending strikes amongst labour unions who believe their cries continue to fall on deaf ears.

Meanwhile, Minister of Labour, Dion Foulkes, and other unionists laid wreaths at the foot of the plaque erected on the outside of the eastern wall that recognizes the four women who lost their lives at last year’s Labour Day parade.

The four female unionists were killed when an unoccupied truck rolled down East Street, hitting marchers as it picked up speed, finally crashing near East and Shirley Street, just feet away from Zion Baptist Church.