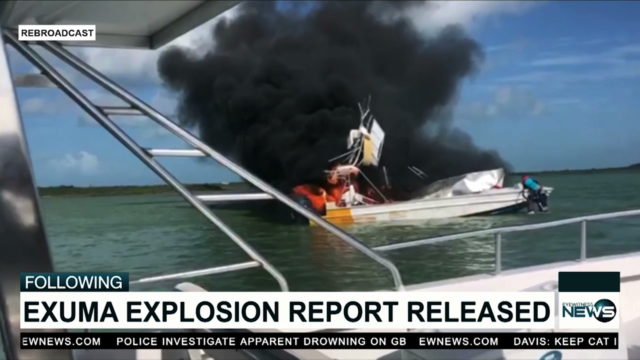 A 38-foot vessel that exploded killing one woman and severely injuring nine others earlier this year in June was not registered with the Port Department and had never been inspected, according to a report released Monday by the Bahamas Maritime Authority (BMA).

The report revealed that the vessel, owned by the company Four C’s was also not designed or constructed to meet any international standards, and was made by the owner using no technical drawings.

It was also found that the fuel fill and vent hose of the vessel did not meet the required specification for its intended purpose.

The report outlined that although the exact cause of the fire had not been determined, a spark generated from the electrical circuit resulting from inadequate and failed or failed isolation material was considered the most probable cause of the explosion.

According to Captain Dwayne Hutchinson, Managing Director and Chief Executive Officer of The Bahamas Maritime Authority, the craft’s construction materials and equipment materials were not verified for suitability or use, and the port department in Exuma was not resourced sufficiently to control and regulate the commercial watercraft operating in Exuma.

“As a consequence, the craft did not comply with the requirements of the Commercial Recreational and Watercraft Act,” Hutchinson said.

The BMA also made a number of recommendations which included amendments to the Commercial Watercraft Act. The BMA has recommended that construction plans for all self-built boats, prior to manufacture, be submitted to the Port Department. This, the BMA said, will ensure that there is compliance with all current applicable safety and operating standards and that each self-built boat undergo a survey by the Port Department to verify its seaworthiness.

“The government also needs to ensure that the Port Department has access to all resources and expertise necessary to regulate, control and administer all matters related to commercial watercraft in the Bahamas,” he said.

Meanwhile, despite the recent Four C’s incident, deputy chairman of the BMA Peter Goulandris said most boat owners are compliant.

On June 30, the adventure craft was carrying 10 American passengers and two Bahamian crew members on a tour of the Exuma Cays when it exploded. One American woman died, her husband had his leg amputated and another woman lost both legs. Nine other passengers on the boat were also injured.

The Four C’s adventure craft was issued a cease and desist order mandating the company suspend operations pending results of this investigation.

It is unclear if the company has resumed operations.