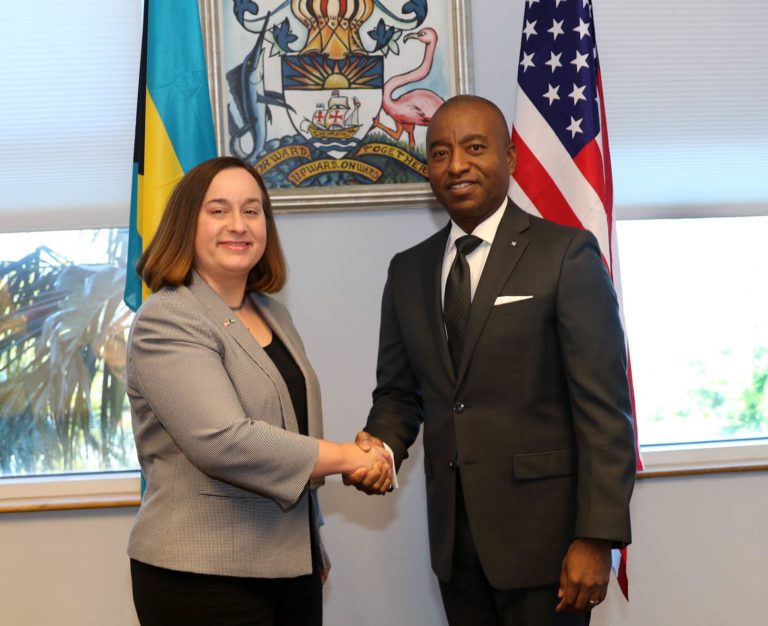 A new Charge d’Affaires has been named to lead the United States Embassy in The Bahamas.

Stephanie Bowers, the second female told the position in the last ten years, paid a courtesy call on Minister of Foreign Affairs Darren Henfield at his ministry yesterday.

During the meeting, the two discussed matters of mutual interest to The Bahamas and the United States.

Bowers, who assumed her role on March 1, replaces Lisa Johnson, who held the post for four years.

A U.S. Embassy release states Bowers began her career as a Foreign Service Officer and most recently served as Chief of Staff of the Department of State’s Bureau of Western Hemisphere Affairs.

According to the statement, she previously she served as Deputy Director of the Office of Central American Affairs, Deputy Director of the Office of International Religious Freedom, Senior Watch Officer in the Secretary of State’s Executive Secretariat Operations Center, and as Caribbean Basin Security Initiative Coordinator and South America Team Leader in the Bureau of International Narcotics and Law Enforcement Affairs (INL).

Bowers, the statement said, also served at the White House as Director for Andean Affairs at the National Security Council.

Outside the Western Hemisphere, Bowers is said to have served in Antananarivo, Madrid, Durban, and Baghdad, where she was the Transition Director for INL.

Nicole Avant is the last to be appointed ambassador for the United States. She served from 2009 to 2011.