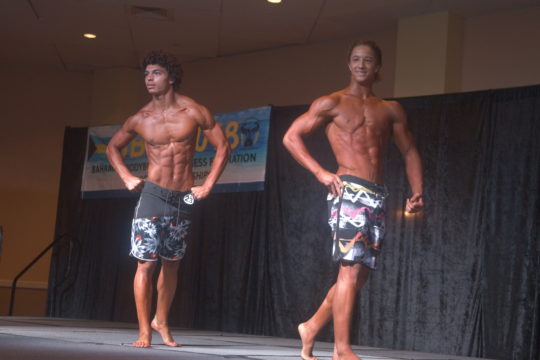 Contestants showcase their physique at The Bahamas Bodybuilding and Fitness Federation's (BBFF) National and Novice Championships.

The Bahamas Bodybuilding and Fitness Federation (BBFF) held its annual National and Novice Championships on Saturday at the Melia Hotel, with winners in each category now preparing for the Central American and Caribbean (CAC) Championships in Mexico, July 27-29.

Although this year’s event featured a lot of new faces, national team coach Raymond Tucker said, he’s impressed with what he saw at nationals.

“I honestly think we have some athletes that can go down to CAC and come away with gold medals, I really do,” Tucker said.

“A lot of the older athletes have now moved on and are working with the federation in different capacities, but from what I saw from this crop of athletes, leaves me feeling confident. With a little time and a little more coaching, I have no doubt that we will be ready to have a good showing in July.

“We are usually one of the best teams in this region, and I think that these athletes will do a good job representing us.”

Last summer’s CAC championships were canceled due to the two massive earthquakes that hit the country in the space of a month.

“We are glad to be able to go to CAC again after what happened last year,” said  BBFF executive member Nardo Dean.

“We know our athletes worked hard to prepare for nationals. And like coach Tucker said, we are confident we will have a good showing. We had a few athlete turn pro already this year in Angelica Wallace-Whitfield and Jameil Hamilton, and we expect a few more before the year is out.”

Some of the proceeds from the nationals will be donated to several charities around New Providence, including Teen Challenge Bahamas, Bilney Lane Children’s Home, Elizabeth Estates Children’s Home, Simpson Penn School for Boys, the Willamae Pratt School for Girls and Nathan’s Group.