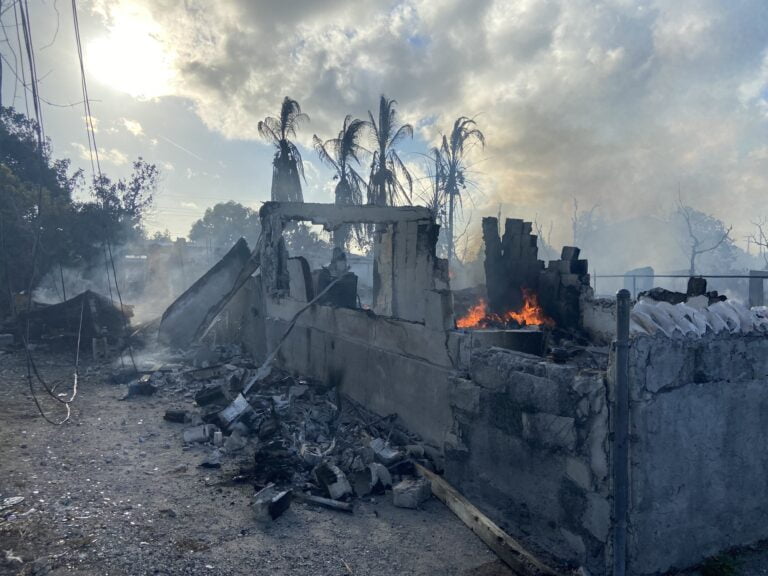 Smoke billows from structures destroyed during a fire on Jennie Street on Sunday, May 2, 2021. (FILE PHOTO)

Campbell, who was speaking to reporters on the matter outside Cabinet yesterday, provided an update on the assistance provided to those families, including short-term shelter, food and clothing.

He said in fire incidents, the Social Services Department also assists with bedding and appliances.

On May 2, a massive fire ripped through 10 structures on Jennie Street, leaving nine families displaced.

A woman in her 90s also had to be taken to hospital for treatment due to smoke inhalation, and ten of the structures impacted by the blaze were destroyed.

Campbell advised that 27 people were assisted by the Department of Social Services and several NGOs have come forward to offer assistance, including the Rotary Club of East Nassau, the Bahamas Pharmaceutical Association and St Philip’s Methodist Church, among others.

He said the Urban Renewal Center in Englerston will be coordinating those donations to ensure the aid meets the specific needs of the individuals, including medication if necessary.

Days after the devastation on Jennie Street, tragedy struck again when a burnt and unrecognizable body was found in the ashes of a fire on Seventh Terrance and Fritz Lane.

Police at the time said four businesses at the bottom of the structure and a church at the top were impacted.

Campbell advised yesterday that four families were affected in this incident and 15 people received assistance from social services.