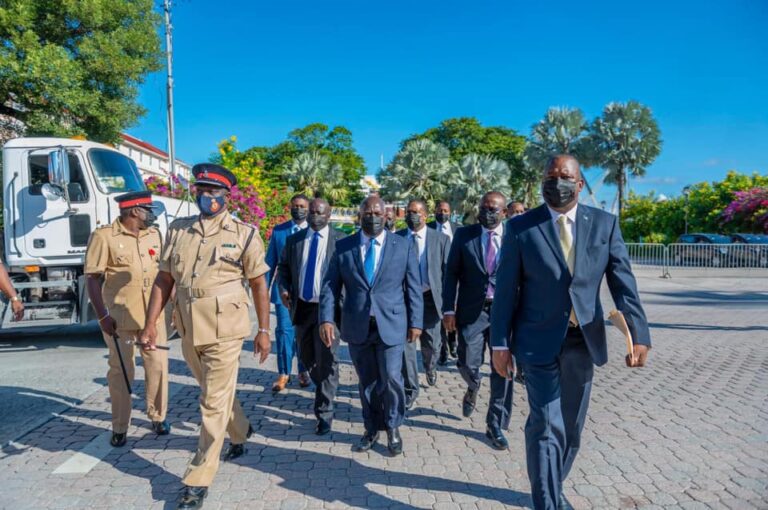 The Davis administration heads to the House of Assembly for the presentation of the 2021/2022 supplementary budget communication on Wednesday, October 27, 2021. (BIS)

“Bringing relief to those who need it, addressing govt’s fiscal situation and stimulating economic growth are immediate priorities”

While making a contribution in the Senate yesterday, Halkitis noted that the approach requires “fundamental” changes to existing models.

He said: “The Davis administration is taking a big-picture approach to national development, economic growth and fiscal health that requires fundamental changes to existing models.”

Halkitis noted that in the Davis administration’s supplementary budget are a number of adjustments to the 2021/2022 budget, which will serve as a foundation for the administration’s agenda.

“Bringing relief to those who need it, addressing the government’s fiscal situation and stimulating economic growth are the immediate priorities,” said Halkitis.

“Yes, part of our plan is the introduction of an across-the-board consumption tax reduction — a reduction that our research has shown will yield savings for everyday Bahamians while stimulating consumption at a critical moment in our economic recovery.

“Existing models indicate that this change will produce a positive impact across all major sectors in our economy, as well as on national employment and income levels.

“But even beyond the tax reduction, this is very much a relief budget.”

He noted that along with tax decreases, the government has reintroduced the RISE program to provide Bahamians with debit cards for direct cash transfers.

“We have the increase in pensions, with those typically making the least amount per month in pension payments receiving the largest increases,” said Halkitis.

“We have made the decision to resume annual increments for civil servants so that their salaries can keep pace with the cost of living.

“With the freezing of increments under the previous administration, even though the nominal amount of public service salaries stayed the same, people were actually making a little less each year due to increases in the cost of living.”

Halkitis said the government is also setting the foundation for sweeping fiscal reform.

“These reforms include improved revenue collection through the Revenue Enhancement Unit,” said Halkitis.

“Progressive reforms will also be developed by the new Revenue Policy Committee, which will be comprised of the brightest fiscal policy and economic minds in our nation.

“We are getting the nation’s finances back on track.”

According to Halkitis, the Davis administration will make amendments to the Public Disclosure Act to include campaign finance reform, with prosecution of those who run afoul of the law.

“Many members of the public feel that the application of justice depends on the socioeconomic background of the accused. Whether there is truth to this or not, it is problematic that members of our society feel this way.

“We are putting in place the framework to ensure that when those at the top break the rules, they are held accountable.

“Our anti-corruption legislation will enforce higher standards of conduct for public officials. Senior officials will be called on to lead by example.

“This idea that there are different rules for the political class and the common man must be done away with. Under this administration, procurement policies will be more transparent and more efficient, ensuring that all government engagements and purchases are done in accordance with the highest standards.

“This may not be the highest-profile or [most] exciting policy issue, but it is very important that we end to inconsistent, discretionary procurement procedures.”

Halkitis further noted that the government will establish a national skills registry and align training programmes with that registry.

“Through this effort, we can respond to labor market demand by filling skills gaps identified in our labor force. We will make the necessary expanded investments in technical and vocational training,” he said.

Halkitis also noted that the government is committed to small business development.

“We recognize that economic growth is largely driven by small businesses,” said Halkitis.

“We therefore remain committed to small business development and increasing access to financing through government funding.

“We will improve access to grants and loans to incentivize and facilitate the launch of more small businesses and support existing businesses.

“Agencies like the Small Business Development Centre, the Bahamas Development Bank and the Venture Capital Fund will continue [to] have significant roles to play. Every Bahamian business owner, no matter how big or small their business is, will be empowered by this administration.”