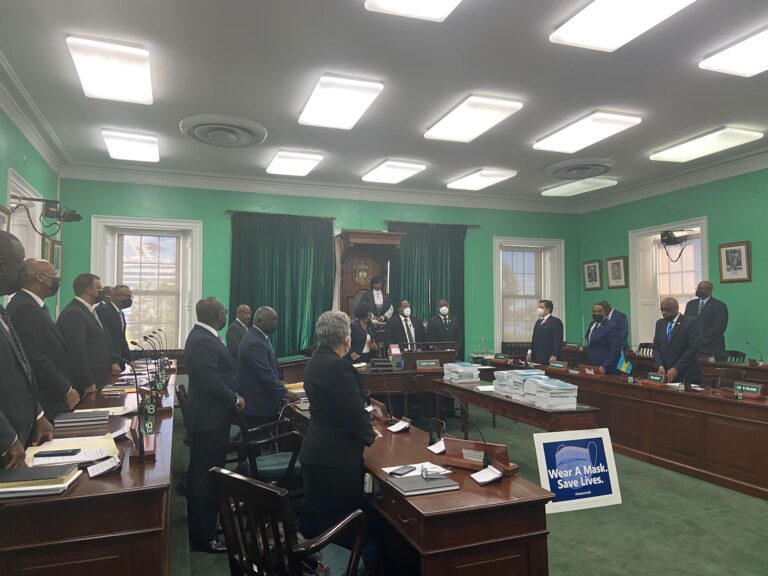 The Davis administration’s first sitting in the House of Assembly on Wednesday, October 27, 2021.

Thompson, the East Grand Bahama MP, while responding to the prime minister’s statement during an opposition press conference yesterday, noted that the $90 million in revenue above target for the first quarter got no mention from the prime minister.

He also called on the government to “come clean” on its value-added tax (VAT) reduction plans, suggesting that removing breadbasket items from the zero-rated category will increase food costs.

“We were very disappointed by the misleading statements made by the prime minister,” said Thompson.

“The statement was filled with half-truths and it was a departure from the normal rules of the House.

He added: “The first thing we want to respond to is the prime minister’s assertion that revenue was disadvantaged because of what was taking place at Inland Revenue and Customs.

“What the prime minister did not say was that a few days ago, as reported by the press and stated by the new financial secretary, is that as [a] result of the FNM’s (Free National Movement) policies during the last three months of our administration, revenue was up by $90 million. That was not mentioned at all in the prime minister’s statement.

“The facts are [that] as a result of the policies put in place and deliberate decisions by the FNM, we now see the fruits of those policies, which is why we are now up by $90 million in terms of revenue collection.

“The facts do not bear out what the prime minister indicated.”

“We only have a pre-election report because the Free National Movement made a deliberate decision to enhance transparency in fiscal affairs,” said Thompson.

He further noted that the report and Fiscal Responsibility Act spell out what should be included, arguing: “We complied 100 percent with the act and the law.”

“We were very deliberate and made specific decisions that, as result of COVID-19, we put specific funding in place to remedy the situation taking place at PMH (Princess Margaret Hospital) and also put funding in place to expand the Rand Memorial Hospital,” said Thompson noting that the government signed a contract in July with the Beck Group for the multimillion-dollar expansion of the two healthcare facilities.

“We made a deliberate decision to take VAT off breadbasket items to reduce the cost of food for those most vulnerable,” said Thompson.

“What the government has said is they will decrease VAT, but [they] have not said that all of those items previously zero-rated will increase by 10 percent, and so the cost of food will go up.

“The cost of all those other items previously zero-rated will go up by 10 percent. That’s [what] was not included in any statement.”

He added: “We call upon the government to come clean and tell the whole story. We will not just listen to what they say but we will watch what they do.”

Thompson also questioned how long the VAT reduction will last.

“If it will only last for one year, as they said prior to the election, it means the increase may be for more than one year and may be permanent. Come clean and tell the whole story to the public,” he said.