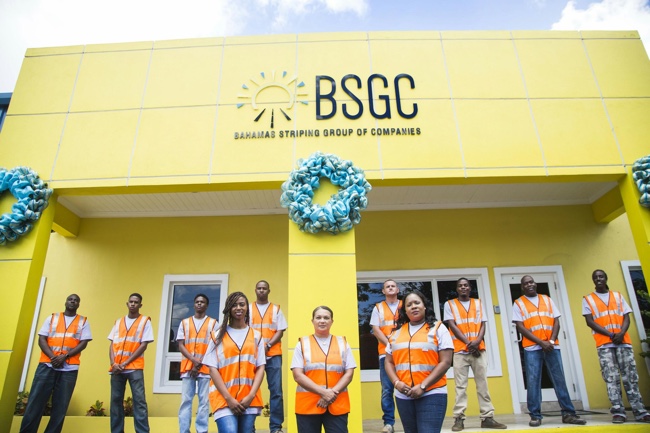 Some of the staff at Bahamas Striping Group of Companies.

With only $5,000 startup capital Bahamas Striping Group of Companies (BSGC) has grown into a multi-million-dollar company in its eight years of business, according to the company’s top official.

Founder and President Atario Mitchell told Eyewitness News Online at the company’s Abundant Life Road headquarters that his idea to start a striping business came from years of his helping an uncle in Abaco stripe roads when he was younger.

A critical proponent of his company’s success he said, was reinvesting profits from contractual jobs, in addition to maintaining good accounting records.

“One of the keys to our success is that we always invest back into the company,” he said.

“What I can say for us, whenever we got paid, we always looked for new equipment to buy, to not just enhance the business but to enhance our fleet where we would be able to handle larger projects.

“That was one of the main challenges I faced, for one, as a young man and as a young company, people always associated experience with age and how much machinery you have.”

BSGC’s first striping machine cost the young entrepreneur $17,000 landed, which he said quickly caused the company to think of ways to offset such high prices in order to maintain a viable business.

Mitchell said, “We have a good relationship with our suppliers where we have established a line of credit so we don’t have to spend the money up front.

“It’s all about coming up with innovative ways of maximizing each potential job and to also do it in a way where it doesn’t strain the business financially.”