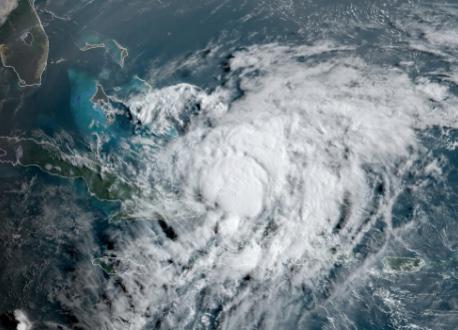 A third system in Atlantic with 20 percent chance of formation

NASSAU, BAHAMAS — “Strong winds and heavy squalls” continue to lash the southeastern islands of The Bahamas as Hurricane Isaias makes its way up the chain of islands and draws down on New Providence.

According to the National Hurricane Centre, Isaias could strengthen further over the next 24 hours to maximum sustained winds of 100 miles per hour, qualifying it as a Category 2 hurricane.

Hurricane conditions are expected today over portions of the country.

As of 8am, Isaias was 30 miles northwest of Great Inagua and 340 miles southeast of New Providence.

It has maximum sustained winds of 80 miles per hour, after strengthening overnight.

The fast moving storm has somewhat slowed as it passes over The Bahamas, moving northwest at 17 miles per hour. A general northwest motion is expected with a further drop in forward speed over the next couple of days.

On the forecast track, the center of Isaias will move over or near the southeastern Bahamas tonight, and move near or over the northwestern Bahamas on Saturday or Sunday.

Isaias is expected to remain a hurricane for the next few days and “some strengthening is possible today”.

The storm is expected to leave The Bahamas by Sunday.

A hurricane warning remains in effect for the entire Bahamas.

A second system in the Atlantic around 1,000 east of the Lesser Antilles is not expected to develop into a cyclone.

Meanwhile, a third weather system a couple of hundred miles east-southeast of Cabo Verde had a 20 percent chance of cyclone formation.