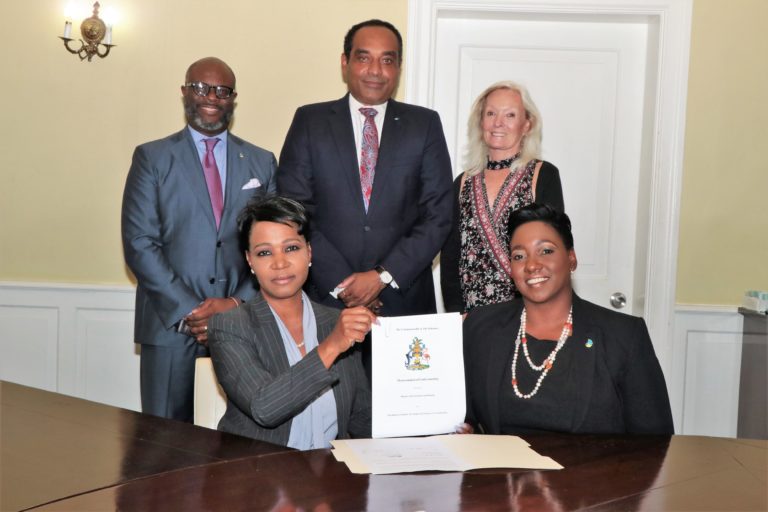 Single use plastics will be officially banned in The Bahamas, a commitment which the government will introduce by 2020, Environment Minister Romauld Ferreira revealed on Monday.

Once implemented, the list of banned plastic products will include plastic bags collected at point of sales, straws, styrofoam food containers and plastic utensils.

His comments came ahead of signing a Memorandum of Understanding (MOU) with Bahamas Chamber of Commerce and Employers Confederation (BCCEC) executives.

The MOU is said to signify the Ministry of the Environment’s commitment to work hand-in-hand- with the chamber, to ensure that the single use plastics ban is introduced without a strain on the local business community.

“We will work to develop a phase out plan for single use plastics,” said Ferreira.

“My ministry, alongside the BCCEC, housing, will embark on a national public consultation and educational outreach campaign. We will visit communities and schools, hold town hall meetings and meet with businesses to gather valuable data that will assist in developing a fair and reasonable phase out plan by 2020.

“We must address the type of waste we dispose of daily, by reducing or eliminating harmful waste streams. These efforts will move The Bahamas one step closer to having an efficient and sustainable waste management system.”

The government is so serious about eliminating harmful plastic waste, it says it will also make the release of balloons in the air illegal.

“The release of balloons in the air eventually ends up in our oceans. They subsequently release toxins and injure marine life. When fish digest these harmful plastics, these are the same fish we end up eating. So, we are not only destroying our environment with these plastics, but we are also causing grave health problems for ourselves as well,” said Ferreira.

“We will also sign onto the clean seas campaign which was launched January 2017 by the United Nations (UN) environment program, which aims to increase global awareness about the need to reduce marine litter by engaging government and private sectors and the general public.”

Bans on plastic consumption have been increasing globally within the last two years.

Belize, most recently, moved to ban single use plastics by April 2019.

In August 2017, Kenya made it illegal to produce, sell or use plastic bags in that country.

The United Kingdom (UK) has outlined a plan to eradicate plastic usage completely by 2042.

Haiti leads the Caribbean in these efforts. The island-nation has banned the use of plastic bags and styrofoam products.

“Noting the negative impacts plastic and styrofoam have on our health, the marine environment and the tourism sector; this initiative is a part of a much bigger picture,” said Ferreira.

“In an effort to lead by example, my ministry has officially banned the purchase and supply of styrofoam cups in our offices. Instead, we encourage all employees to bring their own mugs and reusable water bottles to work, as we aim to expand our office sustainability plan.”