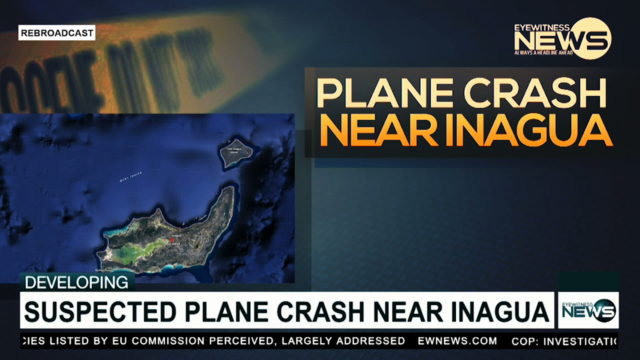 NASSAU, BAHAMAS – Authorities were yesterday searching for an aircraft after the pilot of a plane reported to the U.S. Coast Guard that he had experienced the loss of an engine and was losing altitude, though after several hours of searching it was unclear if the plane crashed.

Police reported around 11:40 a.m. that it was advised that the U.S. Coast Guard received a distress call from the pilot.

Up to 5:00 p.m. yesterday, the joint search and effort being carried out by the U.S. Coast Guard and the Royal Bahamas Defence Force had not located the plane, according to officials.

Speaking to Eyewitness News Online, Air Accident Investigation Department Chief Investigator Delvin Major said the pilot did not provide any other information to the U.S. Coast Guard, and it was unclear what type of aircraft the pilot was flying; how many people were on board; whether the aircraft was inbound or outbound; and which specific area the aircraft was when it experienced difficulty.

“The Coast Guard and I understand the police are still in the area where they believe the aircraft may have experienced problems and up to now there has been no definitive answer as to who was on board, how many persons were on board, the type of aircraft: All of that information is still unknown at this time,” he said.

“The search is still continuing…”

When asked about the search operation and where specifically authorities were searching yesterday afternoon, Major said AAID was advised the search was ongoing in Great Inagua area, but said because it is such a large area it is “like looking for a needle in a haystack”.

“That’s a big area out there,” Major pointed out.

“If they were able to say I’m directly over Great Inagua they could focus the search in that specific area, but if you say, I am going down; down where? That is the difficulty we have when we are talking about search and rescue.”

The Great Inagua Airport is located in Matthew Town.

Asked whether it was possible the aircraft was a twin-engine and managed to land safely, Major said there were too many variables and unknowns to speculate.

“It’s hard to say, but with a twin-engine if [it] has the loss of an engine, the other engine may be able to take you to maybe another place where it can land, but it all depends and there are so many factors that go into, whether it is a single engine or a multi-engine, there are so many factors that could affect whether the aircraft could actually make it to land,” he advised.