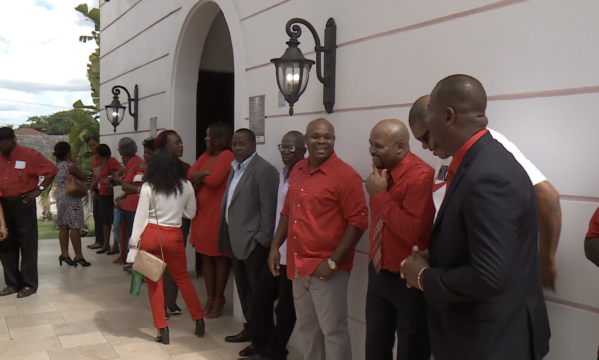 NASSAU, BAHAMAS – Scores of supporters, dressed in red, lined the steps of the magistrate court as a Saint Augustine’s College administrator appeared before Chief Magistrate Joyanne Ferguson-Pratt on Thursday, in connection with the alleged beating of a child enrolled at the institution.

The administrator was reportedly charged last week with causing harm to a minor and was later released on bail.

According to the administrator’s attorney, Jerone Roberts, the defendant showed up to court on Thursday, in compliance with the terms of his bail conditions.

According to Roberts, the teacher’s file has not been forwarded to the Public Prosecutions Office as police are still deliberating whether or not they will go ahead and formally arraign the administrator.

However, according to the prosecutor, the file was not present as attorney Keith Bell was supposed to act on behalf of the administrator and there seemed to be some confusion as to who represented the defendant.

Nonetheless, Ferguson-Pratt said that she is satisfied with the defendant’s compliance.

The prosecutor advised the defendant to report to the Fox Hill Police Station to have his bail extended over the holiday weekend.

Before departing, Ferguson-Pratt assured the accused that his bail would be extended and that he can now enjoy conch fritters over the holiday.

Last week, a disgruntled parent posted his concerns on Facebook, after claiming that his son was allegedly beaten by an administrator at SAC.

The parent also uploaded a photo, which displayed a red bruise on his son’s buttocks. The post garnered a lot of attention, with more one thousand ‘likes’ and nearly two hundred shares.