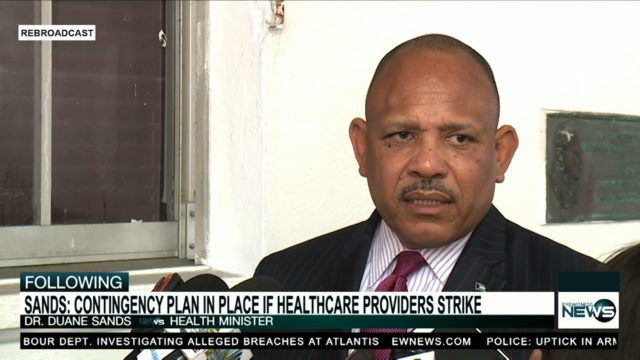 Minister of Health Dr. Duane Sands said it would be a tragedy for patients in The Bahamas if consultant physicians withdraw their services.

Speaking to the media Tuesday outside the Churchill Building, Sands said while he hopes it does not come to that, health officials are advancing contingency plans to ensure health services continue to be provided in that scenario.

The association plans to advise the Public Hospitals Authority (PHA) of its intentions during a meeting on Friday, according to Munroe, who said the association’s lawyer will be present at that meeting.

The group has sought redress over a lack of raises in a decade, health insurance and working conditions.

“Certainly, it would be a tragedy if patients in The Bahamas find themselves in a situation where essential care is withdrawn,” Sands said.

“That would be most unfortunate, and so we continue to be prepared to sit at the table; to negotiate to improve in a substantial way the terms and conditions of service for physicians, which have been a challenge for the last decade.

“We understand the concerns, but we also understand that the Bahamian people only have so much capacity to augment salaries and other benefits for any particular group of professionals.

“We will do the best that we can and we hope that is enough.”

Sands expressed disappointed with the outcome of negotiations which have spanned weeks, saying he believes the PHA has continued to engage the CPSA in good faith.

The association recently rejected a counterproposal from the PHA, calling it unacceptable.

While he did not divulge specifics of the counterproposal PHA submitted to the association, Sands said the government will do the best it can to make a “fair and sustainable” offer.

“Obviously whatever I say will color the public’s perception,” said Sands, when asked whether he believes the CPSA’s proposal to the PHA was unreasonable.

“I believe that the PHA’s management and board are quite willing to make a very generous offer, acknowledging the contributions that our professionals [make]. But, at the same time that offer cannot be made in isolation. It has to be something that the people of The Bahamas and the PHA can afford. It would be unreasonable to make a commitment that cannot be met by the public’s purse, and by extension… cannot be made by the people of The Bahamas.”

The minister was also asked how the government would respond if senior physicians withdraw their services.

“We would have to make contingency plans anyway if it does come to that, but certainly we will negotiate in good faith and the Bahamian people can be assured that health services will be provided,” he said.

Additionally, Sands indicated that negotiations with nurses, who have suggested they will not show up for their new shifts next month, have not progressed as quickly as health officials would like.

Scores of nurses protested outside Princess Margaret Hospital last month against the new shift system, which the PHA said establishes a 40-hour week and an eight-hour daily shift as opposed to the current 10-hour shift for night duty nurses.

The Bahamas Nurses Union has called on the government to intervene.