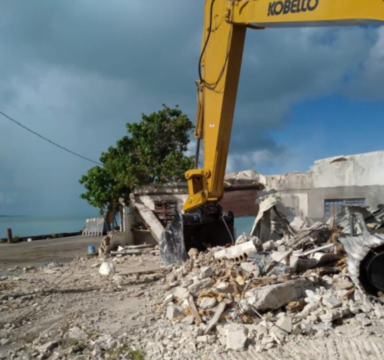 NASSAU, BAHAMAS — Construction of the replacement dock in Rock Sound, Eleuthera has commenced and is set to be completed by May 2021.

Minister of Public Works Desmond Bannister said the existing dock was in a condition where repairs and upgrades were deemed critical.

“The dock in Rock Sound, Eleuthera was in very bad shape. It was crucial that the dock be repaired and upgraded and the existing channel dredged to a deeper depth. The repaired dock will be more convenient for the residents of Eleuthera that utilize the mail boat,” the minister said.

“This structure will allow larger vessels to dock, which will make the loading or unloading of goods or passengers much easier,” said Bannister.

Central and South Eleuthera MP Hank Johnson noted that Eleuthera residents are “thankful to God” the project has commenced.

“Residents are more than happy that the government has decided to upgrade the dock in Rock Sound. The people are grateful and it’s a spin-off economically, and so we are looking forward to having quite a bit of the residents working on the project so there [are] quite a bit of positives to it. The dock was in real bad shape and one of the problems we had there was that we were not able to bring in any large size ships because of the shallow depth of the water. Companies, therefore, discontinued going into Rock Sound and everything had to be trucked out of Governor’s Harbour,” Johnson said.

He added: “Now that they are repairing the dock, putting in a ramp and dredging the basin, we will be able to receive ships of a bigger size and international vessels. Once this dock is completed all of the mail boat services won’t have to come through Governor’s Harbour, they can go directly to Rock Sound.”

Johnson noted that residents will no longer have to transport products from Governors Harbor into Rock Sound.

“It was pretty costly for the residents having to truck items from Governor’s Harbour into Rock Sound,” he noted.

“Eleuthera being 110 miles long with one main port of entry at a central location it made it difficult. That is why it is so important to have that docking facility.

“Rock Sound use to be a main point of entry one time ago; part of it was the developers were in the South and so with that dock being accessible traffic will be reduced quite a bit.”

A & D Gaitor Equipment, Rock & Sand won the contract for the project.

The company’s owner, Andrew Gaitor, noted the project started in September of this year and great progress is being made.

Gaitor said, “The barge arrived in Rock Sound, Eleuthera and was offloaded on September 8, 2020. The first thing we did was demolish the old customs warehouse building. Then we made preparations to go out 200 feet from the main dock to prepare for the dredging process.

“The job requires the dredging to be 125 feet in width and 200 feet in length with a finished level at nine feet water depth at low tide.

“The dredging is 70 percent complete and we are scheduled to be completed by October 16, 2020.”

He added: “After the dredging process is completed we will install sheet piles. The sheet piles are scheduled to arrive in Rock Sound on October 30, 2020.

“The piling process will commence November 6, 2020 and the completion date is estimated to be January 31, 2021.

“As is relates to the refurbishing and extension of the concrete dock, we are hoping work will commence the second week of February next year.

“The fishermen dock removal and demolition is scheduled to begin October 22, 2020. The projected completion date is January 2021.”

Several residents and business owners expressed their gratitude for the new dock.

Oria Culmer, manager of 700 Wines & Spirit, said the new dock will be very convenient for business.

“We will be able to receive our products earlier. This was much needed because sometimes the trucks bringing the goods are late. I’m for it definitely, I’m glad they’re replacing it. I’m very glad this is happening because it is better for the community.”

She continued: “I think this is a good thing the government is doing for Eleuthera. I think the community and myself are happy work is being done.”