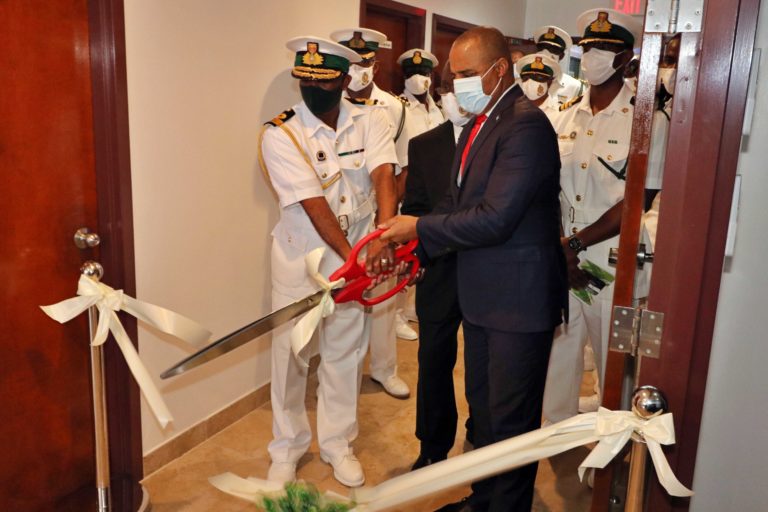 Minister of National Security Marvin Dames performed the official cutting of the ribbon, followed by a tour of the facility. (RBDF Photos by Able Seaman Frederick Russell)

NASSAU, BAHAMAS — The Royal Bahamas Defence Force officially dedicated the Ship’s Bridge Simulator during a brief ceremony at the Coral Harbour base on Thursday.

The equipment was built as a part of the 232 million-dollar Sandy Bottom Project that was signed in 2014, and will enhance the force’s seagoing operations.

“It allows for the ship’s officers and bridge watchkeepers to practice and demonstrate competence in a controlled environment,” read a statement.

“The system is designed to assist the training of the officers and marines as they maneuver and dock in both confined waters and extreme weather conditions and also visually identify lights and navigational marks which are consistent with the rules of the road.”

Commander William Sturrup, the RBDF’s Search and Rescue Coordinator, who also serves as Sea Training Officer, said: “This equipment also allows for shore Officers to be qualified and competent before being assigned to various platforms within the Defence Force. This provides a controlled environment for practice at the trainee’s own pace and time.”

Dames commended King and his officers and marines in the undertaking of this new venture, and welcomed new training.

“Persons are able to obtain training on mooring, anchoring, replenishment at sea, man over board, rules of the road and proper operation of ship BRIDGE equipment in those challenging scenarios”.

Thank God maybe the won’t run another ship aground