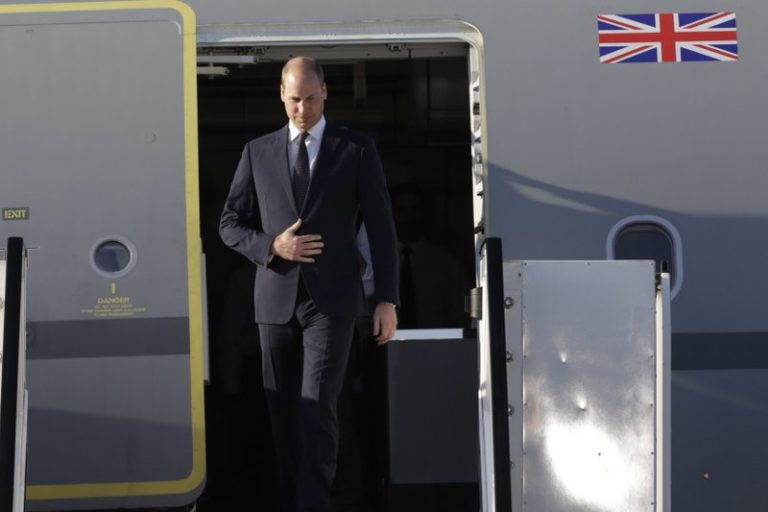 Britain’s Prince William arrives on a Royal Air Force plane at the Ben Gurion airport in Tel Aviv, Israel, Monday, June 25, 2018. William has arrived in Israel for the first-ever official visit by a member of the British royal family. His arrival Monday ends the monarchy’s mostly hands-off approach to one of the world’s most sensitive regions. For the 36-year-old William, second in line to the throne, it marks a high-profile visit that could brandish his international credentials. (AP Photo/Sebastian Scheiner)

JERUSALEM (AP) — Prince William arrived in Israel on Monday for the first-ever official visit of a member of the British royal family to the tumultuous region London once ruled.

Arriving from neighboring Jordan, the Duke of Cambridge landed at Israel’s Ben-Gurion International Airport and then departed to Jerusalem, where he will stay at the elegant King David Hotel, site of the former administrative headquarters of the British mandate.

Three decades of British rule between the two world wars helped establish some of the fault lines of today’s Israeli-Palestinian conflict, and Britain’s withdrawal in 1948 led to the eventual establishment of Israel and Jordan.

Britain has since taken a back seat to the United States in mediating peace efforts, and the royal family has mostly steered clear of the region’s toxic politics.

For the 36-year-old William, second in line to the throne, it marks a high-profile visit that could brandish his international credentials.

Though the trip is being billed as non-political, and places a special emphasis on technology and joint Israeli-Arab projects, William will also be meeting with Israeli and Palestinian leaders, and visiting landmark Jerusalem sites at the heart of the century-old conflict.

On Tuesday he will visit Jerusalem’s Yad Vashem Holocaust memorial, where he will meet two survivors who escaped Nazi Germany for the safety of Britain. The memorial has recognized Prince William’s great-grandmother, Princess Alice, as Righteous Among the Nations for her role in rescuing Jews during the Holocaust.

In a 1994 visit to Yad Vashem, Prince Philip, the Duke of Edinburgh, planted a tree there in his mother’s honor. Princess Alice hid three members of the Cohen family in her palace in Athens during the Nazi occupation of Greece in World War II. Thanks to her, the Cohen family survived and today lives in France. The princess died in 1969, and in 1988 her remains were brought to Jerusalem.

Later, the prince will meet Israeli President Reuven Rivlin and Prime Minister Benjamin Netanyahu before heading to coastal Tel Aviv to attend a football game of young Jewish and Arab players. He’ll also meet the mayor of Tel Aviv and attend a reception the British ambassador is holding in his honor.

Later in the week, he’ll be travelling to the West Bank, where he will meet Palestinian President Mahmoud Abbas in Ramallah before wrapping up the trip in east Jerusalem to visit his great-grandmother’s gravesite.

The royal itinerary managed to anger Israeli politicians by mentioning Jerusalem as being part of “the Occupied Palestinian Territories.” Jerusalem Affairs Minister Zeev Elkin — who is running for mayor of the city in this year’s elections — called the reference a “distortion” that cannot “change reality.”

Israel captured east Jerusalem from Jordan in the 1967 Mideast war and annexed it in a move not internationally recognized. Israel considers the city, home to holy sites sacred to Jews, Christians and Muslims, as an inseparable part of its capital. The Palestinians claim east Jerusalem as their future capital.

The prince arrived from Jordan, where he kicked off his five-day Middle East tour by meeting young scientists, refugees and political leaders. He was hosted by Crown Prince Hussein, 23, a member of the Hashemite dynasty Britain helped install in then-Transjordan almost a century ago. The pair later watched the England-Panama World Cup match together.

In Jordan, the prince attended a reception marking the birthday of his grandmother, Queen Elizabeth II, and toured the ruins of the Roman city of Jerash, a major tourist attraction his wife had visited as a child when she and her family lived in Jordan.

This article was written by ARON HELLER, Associated Press writer.