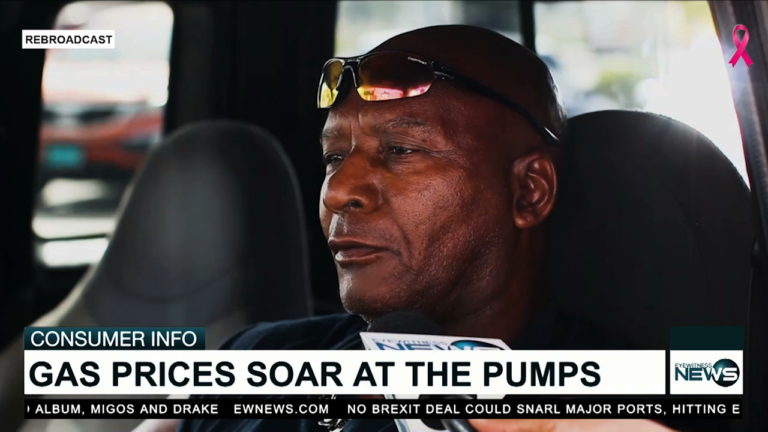 Motorists filling up at the pumps on Monday found that gas prices tipped over the five-dollar margin.

When Eyewitness News visited three petroleum franchises, motorists were more than willing to share their views on this latest price hike.

Eyewitness News’ investigation at the gas pumps revealed that prices at Esso, Rubis and Shell tipped over the five-dollar mark.

Both Esso and Rubis’ gas prices stood at $5.05 per gallon.

“I think it’s ridiculous, I don’t feel it should get so high, it’s not necessary,” shared one male motorist.

“Yes, it’s hurting my pockets, I just got my license and just began driving, I do not have anything to compare it to, but I do know it is high right now,” noted a female patron at Esso gas station.

Meantime, another female driver at Rubis gas station noted, “I feel as though the price of living in this country has really skyrocketed over the past few years, and I don’t know how much longer Bahamians will be able to sustain living with these high prices.

Shell currently has the lowest prices on the island, which is $5.03. But even though they sit on the lower end of the pricing scale here at home, that doesn’t mean that motorists are happy with paying more than five dollars per gallon.

“At one point in my life I used to be able to fill up my tank with $50, but now it takes some $80; that is a significant drop in what I can do now because it’s costing me more to fill up.”

“I think even if it’s just a temporary measure, some assistance needs to be given to the people; we need to live,” she said.

“I understand that the government needs to govern, but at some point, there needs to be a middle ground.”

On the other end of the spectrum was a male motorist at Esso who appeared comfortable with floating wherever the tide flowed.

“I mean it don’t matter to me if it goes up or down, we still have to pay for it,” he opined.

In contrast, a female driver at Rubis said Bahamians suffer because they are too passive.

“As Bahamians, we are too passive and we just sit back and complain and do nothing about it,” she said.

“I think it’s time for Bahamians to stand up and unite and let the government and the private sector know that we are not comfortable with them doing this to us.”

Prices at the pumps are regulated by the government and more often than not, the price hikes that are experienced throughout the country are directly linked to a hike in oil prices on the world market