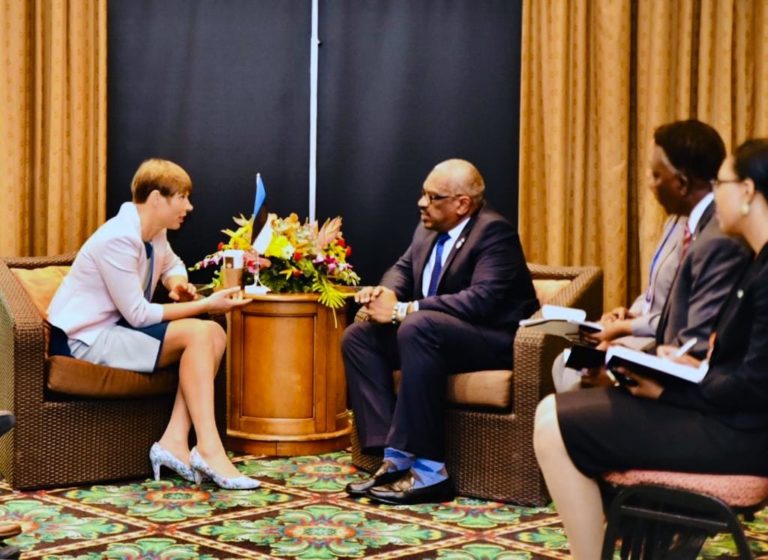 Prime Minister Dr. Hubert Minnis held a bi-lateral meeting on Tuesday with the President of Estonia, Kersti Kaljulaid at the 30th Inter-Sessional Meeting of the Conference of the Heads of Government of the Caribbean Community (CARICOM). (BIS photo by Yontalay Bowe.)

BASSETERRE, ST. KITS AND NEVIS – Prime Minister Dr. Hubert Minnis believes The Bahamas can replicate the success experienced by the Republic of Estonia, which has effectively used technology to transform its government services and attract international investment.

Prime Minister Minnis held a bilateral meeting with the President of the Republic of Estonia, Kersti Kaljulaid, on Tuesday, Feb. 26, on the sidelines of the 30th Inter-Sessional Meeting of the Conference of the Heads of Government of the Caribbean Community (CARICOM).

“The world is moving in the direction of digital transformation and if The Bahamas fails to prepare or keep up with advances it will be left behind, relegated not to a third world country but a fourth world country,” the Prime Minister said.

Estonia is considered to be the world leader in E-Government and digital innovation and has become a model for many countries looking to update and improve public services.

Transforming government services through the modernization and digitization of the public sector is a top priority for the Minnis administration, and is one of the key areas being monitored and supported by the Prime Minister’s Delivery Unit.

A Modernization Unit has been established in the Office of the Prime Minister, and senior government officials took part in e-Governance Training at Estonia’s e-Governance Academy in October 2018, sponsored by the Inter-American Development Bank.

Earlier this year, representatives from the e-Governance Academy visited The Bahamas to hold meetings with private and public stakeholders who will be involved in transforming government services.

While all ministries have made progress to varying degrees, the goal is to streamline government procedures and services by making them available online, increase the use of ICT’s in the public sector and by the Government, increase transparency of Government, and strengthen auditing and control mechanisms.

During the bilateral meeting, Prime Minister Minnis thanked President Kaljulaid for her government’s assistance in helping The Bahamas move toward its goal to modernize and digitize the public sector.

The principal purpose for the meeting was to strengthen relations between the two countries.

President Kaljuiaid was the special guest at the 30th Inter-Sessional Meeting. The President shared with Caribbean Heads her Government’s interest in helping CARICOM build its capacity in e-government.