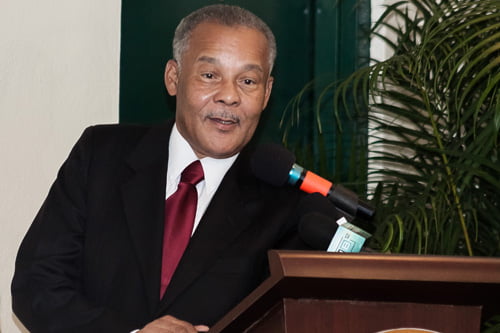 “[Arthur] he was well known throughout the region for his passionate belief in the Caribbean civilization and his commitment to the CARICOM project,” Mitchell said in a statement.

“This is a great personal loss for me.  I could always count on his counsel and the ability to recall some of the more arcane details of CARICOM in my present and past lives.

“He was a weighty presence at the many meetings which I attended as Foreign Minister on behalf of this country. The Bahamas and Barbados are seated beside one another in most international meetings. He always looked out for The Bahamas and for me at a personal level.”

Mitchell said he and Arthur first met in London in 1994, when the latter was Leader of the Opposition.

The PLP senator said Arthur called him for moral support later that year as he planned a vote of no confidence to move against the government.

That vote would defeat then-PM Erskine Sandiford, leading to the dissolution of Barbados’ Parliament and early elections, which saw Arthur sworn in as prime minister.

“It was a proud moment for me to stand with him at the Government House in Barbados to watch his first swearing in,” Mitchell said.

“We have remained comrades ever since.”

He continued: “Barbados’ current Prime Minister, the Hon. Mia Mottley – whom Mr. Arthur first made Minister of Education, then Attorney General, then Minister of Economic Affairs, among other significant and broad roles during his tenure – reflects the success of Mr. Arthur in her continuation of the inspired commitment to the CARICOM project that Mr. Arthur sustained in his public life.

“On behalf of the Leader of the Progressive Liberal Party the Hon. Philip Brave Davis and the entire Parliamentary and officer team, I express condolences to Mr. Arthur’s family, the people of Barbados and to Prime Minister Mia Mottley of Barbados on his passing.”

Mitchell added: “The Caribbean has lost a great son. May he rest in peace.”

Always a headline ahead, around the world, Bahamas, ewnews, ewnews.com, Eyewitness News, www.ewnews.com