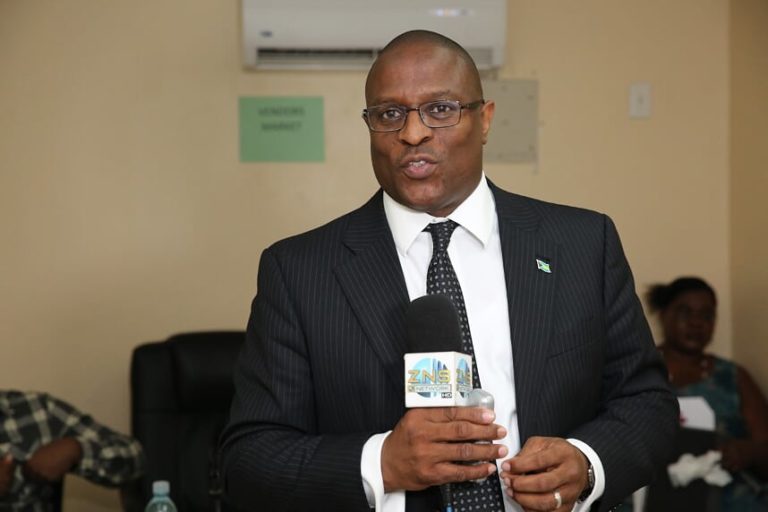 Minister of Agriculture Michael Pintard met with craft vendors and Farmer’s in Grand Bahama. Shown are some of the vendors at the meeting, Thursday, August 2. (BIS Photos/Lisa Davis)

The role of Bahamas Agricultural and Industrial Corporation (BAIC) is to facilitate vendors, not purchase their products and re-sell, Minister of Agriculture and Natural Resources Michael Pintard told vendors at a meeting last Thursday.

The minister let the vendors of the Farmer’s Market know that he studied Agriculture in high school because he wanted to help secure the country’s food security as well as look for ways to reduce the number of items imported.

Pintard was addressing the Craft Vendors during the first in a number of meetings to address their concerns and move the area in the right direction.

“A part of the original purpose of the market is to provide an outlet where our citizens can acquire these goods,” Pintard said.

“Presently, as you are aware, the Bahamas Agricultureal and Industrial Corporation (BAIC) is organising what is called a Pop-up Market. The present formula that you see, is where BAIC purchases from Farmer’s and with a slight markup, sells the item to the public. That model is likely to change in short order.

“Our vision of a Farmer’s Markets, a Pop-up Market, really should be persons who are engaged in farming, whether it is a commercial farm, communal farm, backyard farm, should have a variety of outlets where they sell their goods. The government should facilitate that function. In other words, we should empower farmer’s so that their products can get to market. It is not our role to purchase and sell.

“And so, we are going to re-define in many ways how we do business. And Farmer’s Markets should be numerous throughout the Commonwealth of The Bahamas. What we have here in Grand Bahama, essentially is not a Farmer’s Market.”

What exists today at the Farmer’s Market, he said, is a place where handicrafts are purchased and a few stalls sell farm items.

“It is not an ideal situation. My recommendation and what I am suggesting is that arrangement not continue. That we begin to look at a different arrangement where what you are producing and even to that extent, we are producing far less than what we are selling,” he noted.

“We are often selling items that are not Bahamian products, but I believe it is the role of the government to empower artisans who produce handicrafts, who produce souvenirs so that they are in a position to produce an increased quantity of authentically made Bahamian products.”

The minister said it is also necessary to decide the best location for the items to be sold, and figure out why items are not being produced and sold in a variety of stores only in Grand Bahama but not throughout The Bahamas.

The vendors brought up the problem they were having with security, flooding, and lighting. The Minister assured them that an action list will be created and many of the issued could be dealt with easily, except for the water settling in front of the stalls.

Pintard encouraged the vendors to speak up and discuss their concerns but added that in a structure subsidized by Government, they should not be selling products from other countries, but authentically Bahamian crafts.

Following the meeting with the vendors, Pintard met with Farmer’s on Grand Bahama.

This article was written by ROBYN ADDERLEY, Bahamas Information Services.