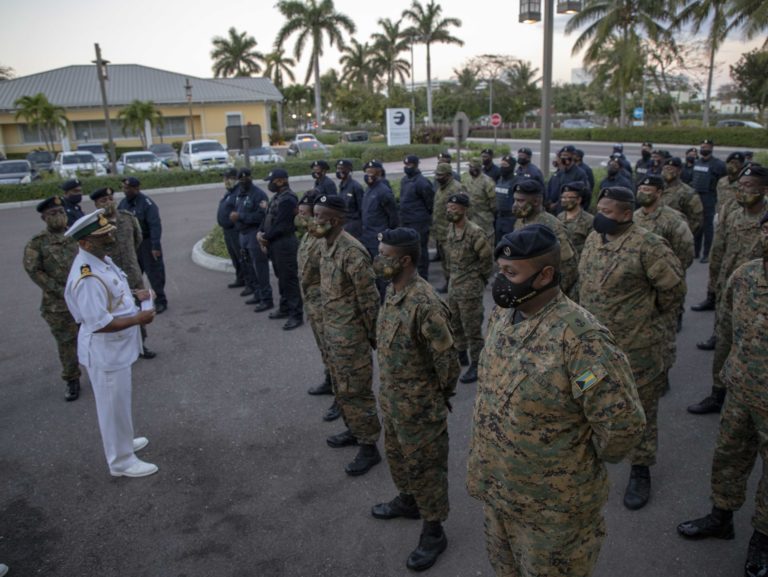 216 COVID cases in RBDF in first week of January

45% of cases from workplace transmission, 30% outside social gatherings, 25% travel-related

NASSAU, BAHAMAS — The operations of the Royal Bahamas Defence Force (RBDF) have been significantly impacted in recent weeks due to the increased number of COVID-19 infections on the force, said Commander Dr Raymond King yesterday.

King, who was providing an update on the force’s operations, advised that with the emergence of the omicron variant, between mid-October and Christmas Eve, the force saw 131 cases and 77 people in quarantine, with a positivity rate of 11 percent and recovery rate of 81 percent.

He compared this to the infections seen when the delta variant emerged last year, which included four active cases and 18 people in quarantine, with a positivity rate of 8.3 percent and a recovery rate of 99.5 percent.

“Notably, we experienced a significant increase during the final week in December 2021, when the number of active cases increased from 13 to 169,” King revealed.

“During the past week, we experienced a decline of some 55 percent in cases to now stand at 119 cases.”

The commander explained that contact tracing data revealed 30 percent of the transmissions on the force occurred as a result of social gatherings amongst family members away from the workplace, 45 percent was workplace transmission and the other 25 percent was travel-related.

Of the 560 members of the RBDF, some 37 percent have been fully vaccinated.

Asked yesterday whether a Christmas party held on the RBDF base led to the uptick in cases on the force, King sought to assure that all health protocols were enforced, with attendees having to present their vaccination status as well as a negative antigen test result, and social distancing enforced.

Later on, we didn’t even have access to our aircraft nor our vessels due to the impact from COVID with this new variant.

However, he admitted that as a result of the increase in cases, there were interruptions to the agency’s operations.

“At one phase, it affected us being able to deploy our vessels whereby we relied solely on our airing division for intelligence surveillance and reconnaissance control to get an early warning of a migrant vessel or any transnational threat in our maritime domain,” he advised.

“Later on, we didn’t even have access to our aircraft nor our vessels due to the impact from COVID with this new variant.”

King said the force had to rely heavily on aerial reconnaissance from OPBAT, the US Coast Guard and the Royal Bahamas Police Force (RBPF) air unit.

He explained that the force must move towards decentralization of its operations now more than ever to ensure flexibility in its changing environment.