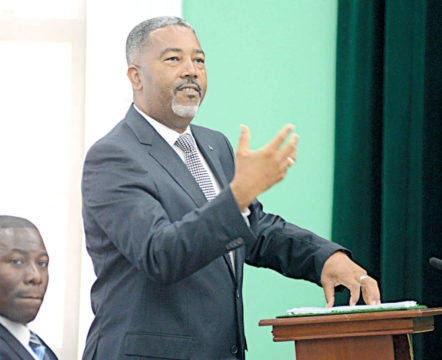 The current General Post Office building, a 7-story low rise structure which sits on East Hill Street, will be imploded and replaced with a modern, state-of-the-art, “purposeful,” facility according to Minister of Transport and Local Government Frankie Campbell.

As the government makes ready to relocate the General Post Office to a new location at Gladstone Road, Campbell revealed that some “exciting” plans are already on the table for what will take shape once the old structure is removed.

“The government is in the process of compulsory acquisition of the Phil’s Food Services building on Gladstone Road,” said Campbell.

“We (the government) have agreed to implode the current building that houses the post office. The plan is to design a new building that is modern. We want to create something that is 21st century so we have an opportunity to modernize and revitalize the down town area and build something new that is ‘purpose built.’”

While Campbell was unable to provide a timeline for the massive undertaking, he noted that once the Ministry of Works provided estimates for works to be carried out at the new site, the government would then proceed to ‘blow up,’ the old structure and replace it forthwith.

According to Campbell, a rising trend in population shift to south-western New Providence influenced the government’s decision to relocate the General Post Office Building.

“Anyone can see that there has been a pop shift to south-western New Providence,” he said.

“If everyone is moving to that rea, why not relocate it to a hub where the people live?

“The General Post Office ought to be the hub where activities take place. This relocation will not affect people in the east who have been going to our satellite location in Elizabeth Estates. It will also not affect those who have been going to locations in Cable Beach or South Beach, we will continue to have satellite locations, including one in downtown.”

“At the new location, people can expect that there will be a conducive working environment for staff and that will create a domino effect, which means that they will provide the Bahamian public satisfactory service as well.”