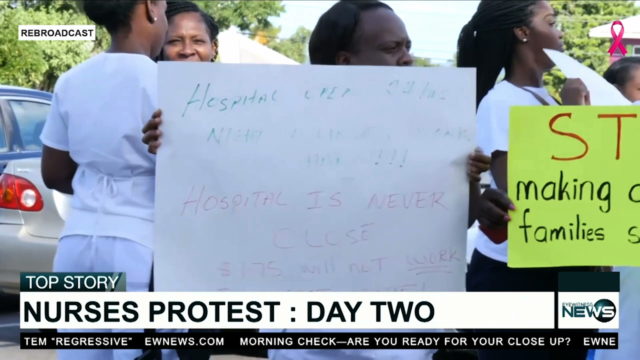 Despite meeting with representatives from the Public Hospitals Authority, the Bahamas Nurses Union (BNU)protested for a second day outside the Ministry of Health on Wednesday.

Dozens of nurses from the Princess Margaret Hospital, Sandilands and public clinics around the capital marched from the old post office building on East Hill Street to Meeting Street, to show the PHA as well as Health Minister Dr Duane Sands that they mean business.

They were expressing their displeasure with the newly-announced shift change with many saying that they would quit if forced to work a five-day shift period versus a four.

BNU president Amancha Williams told Eyewitness News that no nurse will be working the new shift.

“We are prepared to still work the same shift.  We cannot get penalized for that. We must be in mutual agreement when there is a change that PHA or the employer wants to carry out,” she said.

“The union is sticking to it. We will sit on the lawn; we will not work. What is the PHA prepared to do when you know that you are wrong? What does the minister want to do when legally they said this won’t hold up in court? You have to respect the industrial agreement.”

In its latest statement released to the media on Wednesday night, the Public Hospitals Authority (PHA) said it remains resolute in the implementation of a new standardized shift system.

The statement outlined that it acknowledges with extreme interest, the Bahamas Nurses Union’s position through its former President, relative to the Specific Agreement entered into with the PHA on December 9, 2014.

The PHA said they found it reprehensible that the BNU would publicly declare that it knowingly came to the negotiation table with the expressed intent to deceive the PHA – and by extension the Government of The Bahamas – by executing a document that in their opinion would be unenforceable.

“This outright admittance by the BNU clearly indicates a lack of good faith in negotiation. The PHA sincerely hopes that this was a case of miscommunication,” the statement read.

The PHA said it stands on its original position that its proposed implementation of the standardized shift system is supported by and is in compliance with The Employment Act of 2001, the Specific Agreement dated December 9, 2014 and the Industrial Agreements between the PHA and the BNU covering the periods of July 1, 2010 to November 15, 2015 and November 16, 2015 to November 15, 2020.

“We further contend that we do not rely on these agreements in combination, but that each document stands on their own, giving rise to our authority to amend our shift system as well as our roster schedules.”

“Further in consideration to our nurses and the BNU, we sought their concurrence regarding the value of the compensation; the period of the work week, as well as the minimum break period between shifts, to which the BNU agreed.”

The PHA said it is committed to providing the highest quality of patient care without any compromise to the quality of service through its professional cadre and in the patients’ best interest.