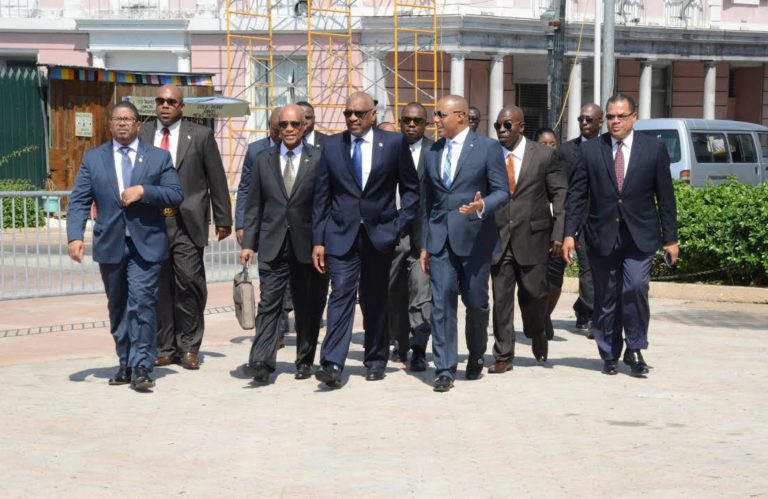 The Bahamian economy has “turned the corner”, so say the experts of the International Monetary Fund (IMF) in their 2018 Country Report. As a part of this uptick, IMF points to Prime Minister Hubert Minnis’ administration, which “has committed to tackling fiscal and structural challenges as central tenets of its agenda.”  Moreover, “near-term economic prospects are improving, with real GDP growth projected to reach 2 ½ percent in 2018—all good news. The IMF has based this assessment on what it labels “upward revisions to GDP”.

Obviously, The Bahamas has begun a journey towards a good place, but it’s no time yet for a junkanoo rushout.

According to the IMF, “significant challenges remain,” including “fiscal deficits that remain above debt-stabilizing levels.”

In reports such as these, the term ‘GDP’ occurs often, so it’s worth knowing what it means.  Investopedia notes: “The gross domestic product (GDP) is one of the primary indicators used to gauge the health of a country’s economy.”

This is the standard definition of GDP, but there are other inputs, other measurements that determine the health of the economy. These are cultural norms, reflected in and guiding the human behaviour, which have as great an impact as national fiscal provisions on the overall quality of life in The Bahamas. From my personal dictionary, I wish to point out “GDPs” that are now ingrained in Bahamian culture, presenting significant obstacles to national progress.

Gross Diehard Paternalism: Majority Rule was supposed to liberate The Bahamas; instead, the post-majority narrative has, so far, given rise to the primary GDP——a blueprint for a new form of enslavement. Cooked up by politicians hungry for a winning and keeping a seat in Parliament, Bahamians have readily digested a steady diet of protectionism. Consequently, a growing majority have become a Grossly Dependent People.

The MP, the Government of the day have become all-powerful gods to many poorly socialized, superficially educated Bahamians, who are like the grasshopper in Aesop’s fable—we want nothing more than to dance without the burden of planning and working for a sustainable future. In the new Bahamian imaginary, these all-powerful beings of the Bahamian Olympus are expected to descend into the shambles we have made of our lives and rebuild without any contribution from us. If they value their primacy in governance, they must erase all records of our mistakes, while licensing (or at least turning a blind eye to) further force-ten hurricane destructive behaviour as follows:

Grave Ditching of Principles: Spurning those laws of life, which help to make human interaction and existence on this planet worthwhile—Integrity, Spirituality, Courage, Gratitude, Thanksgiving, Tolerance, Resourcefulness, Persistence, Resilience, and so on.

Gross Delinquency in Parenting: In loco parentis, we substitute electronic devices, unmonitored, to be child minders and create our children’s value system. For modelling behaviour, such devices give unfiltered access to YouTube “reality” stars and Twitter philosophies, which range from the sublime to the ridiculous and even to the demonic.

Gross Displays of Public indecency: Acts that are best left to private spaces are screened for public viewing and sold as entertainment or, worse still, as the right to freedom of expression as enshrined in the Bahamas Constitution.

A special word must be said of another harmful GDP—Graduate Degrees in Pessimism—held and promoted by demagogues, who, in seeking power, denigrate every act of the current administration, and fool Bahamians into joining protests on unreflected, poorly understood and sometimes even damaging grounds. While this writer holds dear the citizen’s right to a voice in the governance of our homeland, I hold as fiercely that protest should derive its legitimacy from truth, knowledge, reflection, and honesty, all focused on promoting/upholding the common good and not unmitigated greed as demonstrated by some public servants, business and social leaders, past and present.

These special “GDPs” are but a sample—but more than capable of obstructing personal and national progress. As a result, the people’s hold on any sense of patriotism, any sense of responsibility to self, to neighbour, to the environment which sustains us is dying, fast achieving terminal velocity. So, how do the government administration and citizens of goodwill change this destructive trajectory?

The following are proposed: