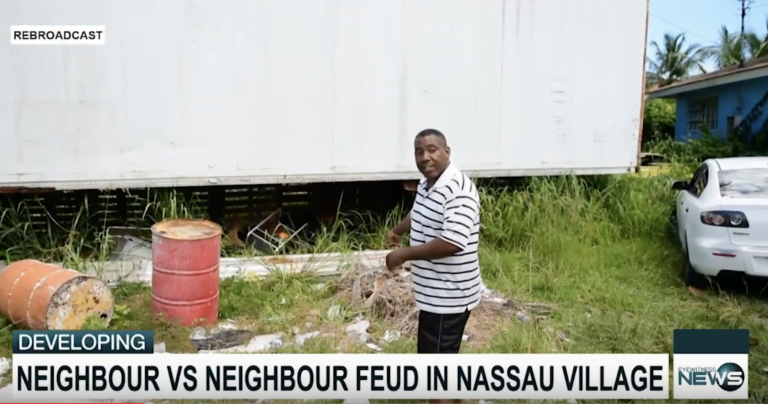 NASSAU, BAHAMAS – Two neighbours living in the Nassau Village community got into a heated verbal confrontation on Wednesday, over the placement of trailers and other debris.

And despite having two derelict vehicles in his yard, Williams wants Percentie to move his large shipping containers, which he says sits on some of his land.

He also wants Percentie to remove multiple mounds of waste that he claims is an eyesore.

“When he put this one [trailer] here, I asked him if he’s going to leave it there. He told me no, he’s not going to leave it there. He said he’s only taking his stuff out there and then he’ll move it, but he said this from 2015. Every time I turn around, there’s a different trailer that keeps on coming [and] nothing is going out,” Percentie alleged.

“I’m trying to understand why all that debris is there in the back of his yard, and then he’s still bringing other stuff. My thing is, you keep bringing stuff, and stuff is not going out.”

Williams also claimed that vagrants who inhabit the trailers are also using an abandoned building adjacent to his house as a toilet facility.

He is also concerned about the security of his family and his home as he said the trailers have blind spots for criminals.

“I told him these trailers will only entertain criminal activity, [but] he thought I was joking. The fellas come right there and cut my window screen open over my little boy’s head, while I’m standing in the room and watching. Now, you know where that fella walked? Right behind this same trailer and gone in the back of the yard,” Williams told Eyewitness News Online.

However, Percentie has a different perspective on the matter.

Percentie claims that the placement of the trailers was temporary and he alleged that other neighbours contributed to the mess in his yard.

“These things are only in transit,” Percentie said.

“I own about four 40ft. containers.

“The intent was to bring them where I can get rid of the debris to finish the projects I was doing,  and to neatly and properly put them in my containers and trash them off. [There isn’t anything] that has been lingering around here for months and years.

“There were trucks and trucks of debris that I took out of this corner… This corner used my property for garbage.”

Meanwhile, both parties said they just want peace and cleanliness in the Nassau Village neighborhood.