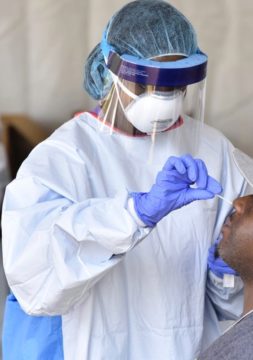 Sands told reporters outside Cabinet that more than 50 percent of the results have returned negative for the virus.

“Most of the person would have been at the end of their 14-day exposure,” he said, when asked when those cleared would be expected to return to work, “so certainly expect the majority of those person to be appropriately counselled, determine how they are doing physically, psychologically and then to return to the work force”.

There were eight confirmed cases in the Medical/Surgical Ward at PMH, with one of the cases linked to the Sandilands Rehabilitation Centre (SRC).

A patient was transferred from the SRC’s Robert Smith Unit to the Medical Surgical Ward II at PMH for further medical management on April 5.

According to Sands, the patient received treatment at PMH and was discharged on April 15 to SRC.

A few days later, the Medical Surgical Ward II of PMH was declared compromised and closed to new admissions on April 18.

The initial Robert Smith Unit patient was returned to PMH confirmed positive for COVID-19 on April 20.

Among those exposed were 46 staff members at Sandilands were identified for risk exposure assessment.

There have been 81 confirmed cases of COVID-19 in The Bahamas, of which 16 of those cases are healthcare workers.

Always a headline ahead, around the world, Bahamas, ewnews