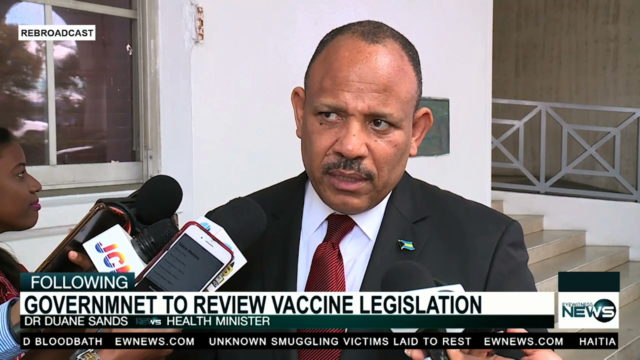 NASSAU, BAHAMAS – More than 15,000 children still need to be vaccinated, according to Minister of Health Dr. Duane Sands.

Addressing the press before heading to Tuesday’s Cabinet meeting, Dr. sands said even though the law requires children to be vaccinated by a certain age because the penalty is only a $4 fine, most parents just ignore it.

“The approach is to sensitize and educate the public about the challenges of the anti-vaccination movement and the impact on what we call herd immunity,” Dr. Sands said.

“We want to make sure that The Bahamas remains a safe place for vaccine-preventable illnesses so we want to try and get our coverage for MMR (measles, mumps and rubella) at 95 per cent.

“We are at just about 90 per cent. It is good but it could be better. We do not want [to hear] the heartbreaking stories we keep hearing coming out of America.”

Last week, Dr Sands encouraged parents to vaccinate their children, after a state of emergency was declared in the United States following a measles outbreak that has affected more than two dozen people, the majority of them children.

Dr. Sands said because of that outbreak, coupled with the collapse of Venezuela’s public health care system, his ministry is extremely concerned.

“Measles is certainly now back with us,” Dr. Sands told reporters yesterday. “We now see serious threats to the region, so the Ministry of Health recognizes that we have to go back and look at strategies to increase our immunization coverage, not just for measles, but for a number of other vaccine-preventable illnesses, given the collapse of the public health system in a huge country in South America.”

According to the Centers for Disease Control, 90 per cent of non-immunized individuals near an infected person will contract it.

Measles spreads through the air, and the virus can live for up to two hours in the airspace where an infected person coughed or sneezed.

It can also be difficult to catch early signs of the illness and symptoms generally start to appear seven to 14 days after infection, meaning that people can spread the disease before they know they are sick.