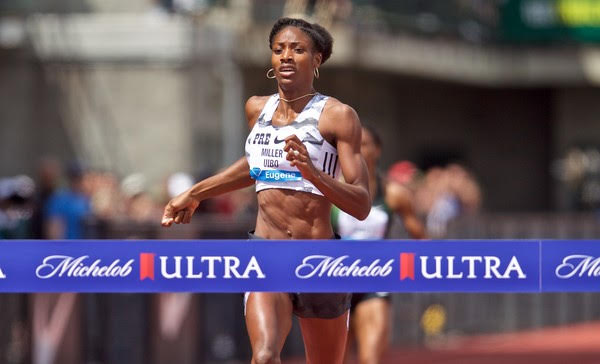 Shaunae Miller-Uibo won the women’s 400m at the Prefontaine Classic in 49.52 seconds (Zimbio)

Shaunae Miller-Uibo turned in another strong performance over the weekend in the women’s 400-metres (m), in the 2018 Prefontaine Classic in Eugene, Oregon.

Miller cruised to an easy win in her first 400m of the year, in the third meeting of the International Association of Athletics Federations (IAAF) Diamond League at Hayward Field, crossing the line in a world leading 49.52 seconds. The race was supposed to be a rematch between Miller-Uibo and American Allyson Felix, however, Felix bowed out of the race a day before the competition.

“I was feeling strong and the race just felt really good,” Miller-Uibo said after winning the event.

“There are still a few things we have to work on, but overall things went pretty well. This has been my quickest open in the 400, so I’ll live with it. But once we work on the things we have to fix, I look forward to seeing my times lower during the rest of the season.

Miller, who ran out of lane four, trailed world champion Phyllis Francis after the first 200m, but came off the turn level with her and pulled away to leave the field behind and finish without a challenger.

Along with Miller-Uibo, Donald Thomas also competed in Eugene on Saturday. He was eighth in the men’s high jump, with a leap of 2.21m.