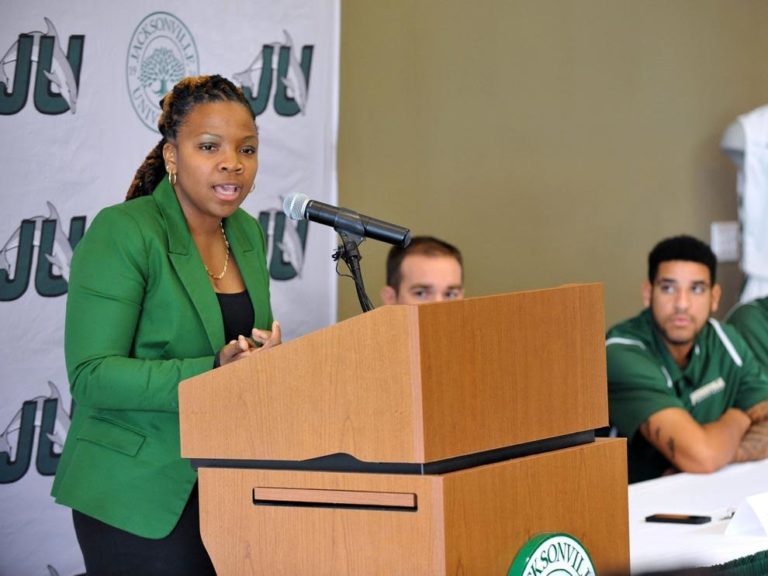 After searching for more than a month, Ole Miss University has found its next women’s basketball coach.

The university named coach Yolett McPhee-McCuin as the ninth coach in program history on Wednesday morning.

McPhee-McCuin is the first black female head coach in program history and will be introduced at The Pavilion at noon Friday.

“Once I stepped on campus, there was no doubt in my mind that Ole Miss had the potential to be a force to be reckoned with, not only in the SEC, but nationally as well,” McPhee-McCuin said in a statement.

“I am overwhelmed and overjoyed right now, but I’m also ready to get to work. Before I look to the future, I cannot go without expressing my appreciation for president Cost, Alex Ricker-Gilbert, my staff, team, and the entire Jacksonville community.”

“I will forever be a Dolphin. I love this University and what it stands for. I look forward to seeing the direction of the program and will deeply miss the city of Jacksonville and the University community,” she said.

“I’d like to thank Chancellor Jeff Vitter and Ross Bjork for their complete vote of confidence in me, and I look forward to getting started.”

“As the daughter of legendary Bahamian basketball coach Gladstone ‘Moon’ McPhee and her mother, a teacher, coach Yo’ has coaching and leadership running through her DNA. Throughout our search process, it became clear to us. Coach McCuin is a star in the making, and we better secure her leadership before another program does.”

In addition to winning 69 games over the past three seasons, JU has also produced four 1,000-point scorers and the only player in program history to record 1,000 rebounds.

She takes over a Rebels program that has gone 18-62 in SEC play over the past five seasons and hasn’t made the NCAA Tournament since a run to the Elite 8 in 2007. McPhee-McCuin, who was an assistant at Clemson and Pittsburgh, is also the head coach for The Bahamas’ national team.