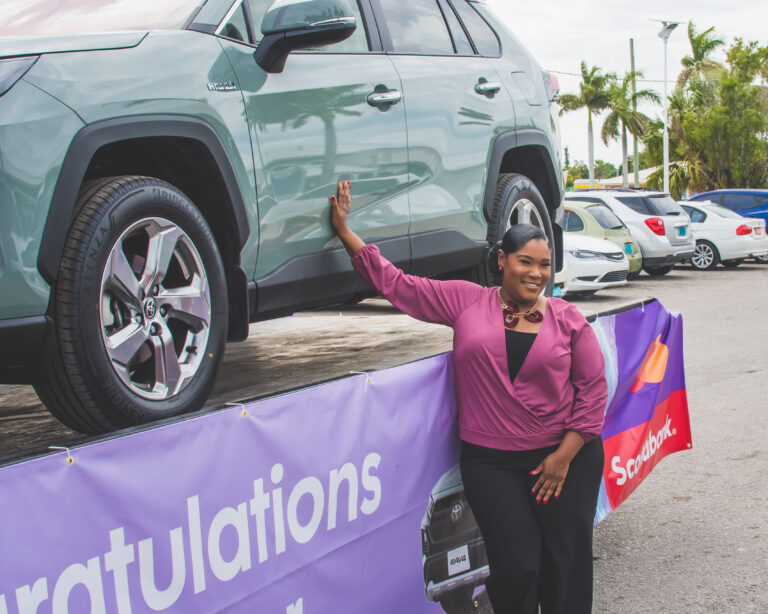 NASSAU, BAHAMAS — Grand Bahama native Lucresia Miller-Dickenson, who has been a loyal Scotiabank customer for over 20 years, was selected as the lucky grand prize winner of a 2021 Toyota RAV4 SUV through the bank’s “Activate Your Power” promotion.

During the promotion, which ran from June 25 to August 31, 2021, all Scotiabank Bahamas customers who either activated or “tapped” their new Mastercard debit cards to make purchases were automatically entered to win the SUV.

Miller-Dickenson, who collected the keys to her new SUV in late November, said she was preparing salads for the next day when she received the phone call.

“I didn’t recognize the number at first, so I was going to ignore the call, but I said I’ll answer the call quickly then get back to what I was doing,” she said.

After confirming that the call was legitimate, in a bout of excitement, she thanked the Scotiabank Bahamas representative and started screaming after hanging up.

“I didn’t want to tell anyone about the car until I had signed the documents and collected the car,” she said.

“I am so happy it was someone from Freeport. I’m glad to represent Grand Bahama.”

Asked where she thinks she might have been entered into the drawing, Miller-Dickenson noted that she used her card quite a bit last summer to grocery shop locally and travel.

“I love banking with Scotiabank because the customer service is excellent and reliable, especially when it comes to anybody trying to hack into your account,” she said.

“My card was hacked but, through instant notifications, I was immediately made aware, which allowed me to stop future attempts ahead of time.”

Na-amah Barker, director of retail banking at Scotiabank, noted the increased security and convenience of the bank’s new “chip and PIN” debit card.

“The added safety benefit comes through enhanced authentication technology that is utilized for the card verification process,” she said.

The bank is also promoting its new “ap to pay” feature, which allows cardholders to make purchases of up to $50 without having to hand their card over to the cashier, at supporting merchants.

This new function allows for more secure transactions, “especially in light of the ongoing health concerns brought on by COVID-19”, noted Barker.

Miller-Dickenson, who promised to continue to promote the bank, said: “Scotiabank, I would truly like to thank you from the bottom of my heart for this car. This is going to change my life in so many ways, you have no idea.”