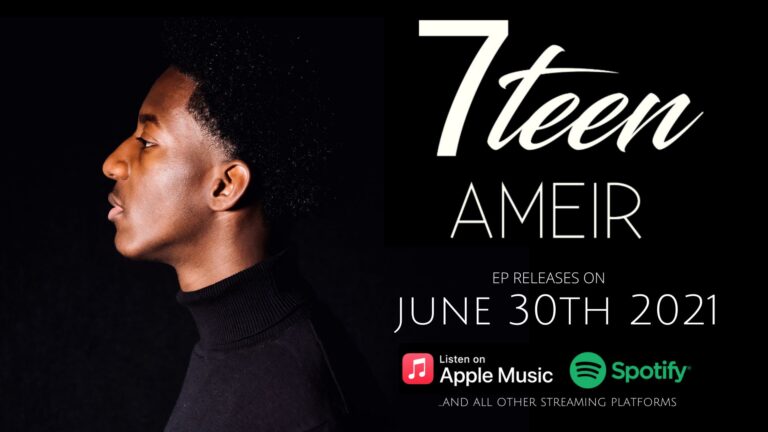 Bahamian lyricist and songwriter Ameir, 18, a former Queen’s College student and recent graduate of Walnut Hill School for the Arts who debuted his EP “7teen” on July 5, 2021. (PHOTO: ANTONIO VIVA)

The EP was produced by Grammy-winning Detroit producers Herschel Boone and Luis Resto —best known for his work with rapper Eminem, and mixed and mastered by Benny Ibarra, the celebrated musician and actor from Mexico. Ameir is grateful to them for their support and expertise in the enhancement of what started as his high school senior project.

His mom, O’Layinka, speaking from her home in Nassau, said she is proud of her son.

“We’re all immensely proud of him,” she said. “Growing up, Ameir always showed signs of his creativity. But we saw it in action when he began editing a video, and surprising the family with his dance abilities and a solo song at a school fair.”

As a young scholar, Ameir won the 2016 Templeton Laws of Life Essay Competition, was a 2020 Scholastic Regional Silver Key Writing Award and was recognized in the E Clement National Arts Festival for Gospel Duet and Acting in 2018. Ameir is also an accomplished producer and actor. He’s appeared in local radio and television commercials for Tampico Bahamas and Aliv.

His agent, Sonia S Brown of Brown Entertainment Group, knew from the very start that Ameir was destined for success.

“I’ve been working with him professionally, as his agent, for a few years,” she said. “He has always been exceptional, and I knew he would be great. He is now preparing for college, where he will major in media and film.”

Brown noted that Ameir’s journey is an example of perseverance and commitment to goals.

“I want Bahamians to realize that if you have a dream, the only thing that can stop you is you,” Brown said. “It doesn’t matter how far-fetched it may seem, the country you were born in or the color of your skin. If you have a gift, dream or talent, you need to cultivate and develop it and believe in yourself. If you decide that you can do something, you can do it. Don’t lose heart or hope.”

On his debut EP, Ameir reflects on the defining stories of his 17th year of life. He pops into a new scene in “Only Me”, not finding much that looks like him, but is positive he will thrive despite anything. Smitten by a new “Crush”, Ameir, in this R&B tune, confesses his blues when she lets him down suddenly, echoing a previous fling. Losing the girl is one thing, but now he loses his fake friends, forcing him to consider his rake ‘n scrape roots telling him to “Big Up Yourself”. Although he hears the song’s instruction, isolation gets to him as he cries out in an emotional ballad, “Lonely”. Being alone does allow him to predict the future he sees for himself in a jazz, hip-hop fusion, “Young Millionaire”. Now, he just needs a little help steering those dreams with his faith, taking us to church with the sultry sounds of his negotiations with God in “Take Me”.