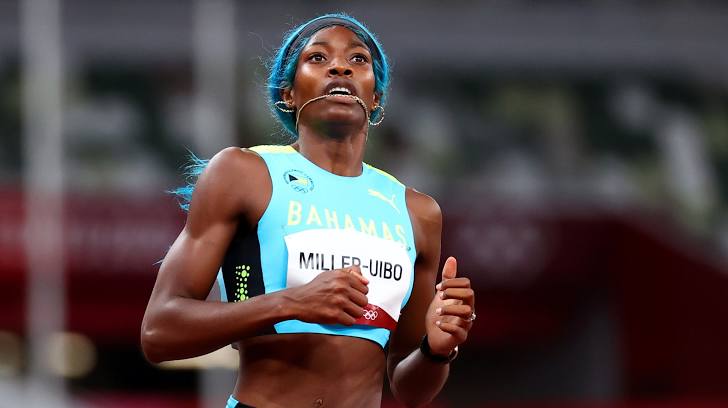 Shaunae Miller-Uibo runs in the semifinals of the women’s 200 meter race at the Tokyo 2020 Olympics on Monday, August 2, 2021. (REUTERS/LUCY NICHOLSON)

Equality Bahamas has observed that Shaunae Miller-Uibo’s gold medal win and the Bahamian thirst for victory on the international stage has, once again, drawn attention to inequality in nationality rights. Following Miller-Uibo’s 400m win, social media was abuzz not only with celebration, but concern that, should she choose to have children, they would not automatically be Bahamian. A senator has also used this moment to display support for another referendum on this issue.

Women are already under far too much scrutiny regarding our bodies and, more specifically, our reproductive systems and the decisions we make about them. As an athlete, Miller-Uibo is certainly under even more scrutiny and has more to weigh when making decisions about her body and having children. We must not, as a nation, as advocates, as government officials, add to the noise by making her the face of gender inequality in nationality law — an issue that predates her athletic career and marriage and affects people with no national or international platform.

People are already placing a value on Miller-Uibo’s nonexistent children in the attempt to change public opinion and in doing so, they set the expectation that she will not only have a child or children, but that they will have the athleticism of their parents and this — this alone — entitles them to the Bahamian citizenship they would not otherwise be able to access but by application within a small window of adulthood.

It suggests that other Bahamian women who are not athletes and do not possess specialized skills or talents that put them, and The Bahamas, on international stages and make them particularly valuable to us are not as deserving of the right to confer citizenship as men already do. It suggests that we need to be exceptional in order for anyone to care about our rights. This is a gross and dangerous path, especially for those who claim to promote and advocate for women’s human rights.

It is not a tragedy that an athlete may face the same fate as many other Bahamian women, but that any of us have and will continue to face it until we amend the Constitution. We do not need to earn human rights. We need our rights to be recognized, enshrined in the Constitution, protected by duty-bearers, reinforced by policies and evidenced in practice.

Equality Bahamas urges political parties and candidates to make their positions clear, not with mere statements but with commitments to the women of The Bahamas.

We, unfortunately, have to be wary of representatives who now piggyback on the social commentary and use an exceptional individual as a symbol, likely without her consent. We must also pay attention to where the blame is laid. The narrative, since 2016, has been that women voted against themselves. People spewing this nonsense are not to be trusted as they are looking at the surface and offering no analysis. They are refusing to acknowledge the effects of lifelong patriarchy, consistent experiences of misogyny and the religious fundamentalism that permeates society. They are refusing to acknowledge the environment within which the 2016 referendum took place — the insufficiency of the educational campaign, the fast-spreading misinformation and stoking of homophobia and xenophobic sentiments.

During election season, people spout anything they think will gain them or their political parties points with voters. We need to demand more than easy, small talk. We need commitments.

The CEDAW Committee, in its Concluding Observations in 2018, recommended that The Bahamas remove reservations on Articles 2(a) and 9 to demonstrate its commitment to eliminating discrimination against women. It also recommended that the state “set a clear time frame for a Constitution reform supported by a comprehensive educational and awareness-raising campaign and the inclusive participation of civil society organizations” and a comprehensive review of existing legislation. This is our demand. This is the commitment we expect from those who want the votes of women and the people who support women’s rights.

Political parties that are serious about being a part of the next administration and that are committed to the recognition, protection and expansion of women’s rights in The Bahamas must do no less than commit to a set date for the next gender equality referendum and develop a plan to, in the interim, address this issue through legislation and policy. Anything less is empty rhetoric.