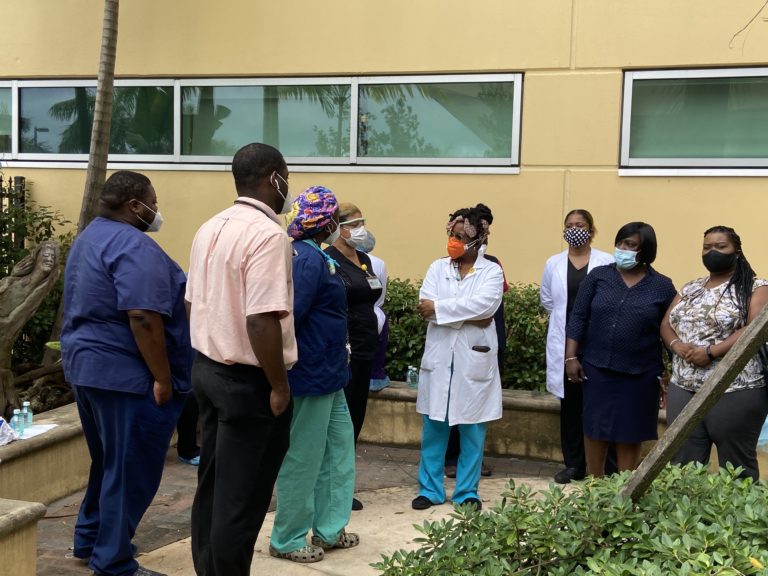 Several doctors, nurses and staff at the Princess Margaret Hospital’s Accident and Emergency Department stand outside the hospital in protest of working conditions.

It is sad, but more importantly untrue, to mislead the public by stating the generalization that the government, or most government agencies, have not had any layoffs or redundancies.

While many areas of government lend themselves to misstatement and innuendo, public health is one of those areas where if we are honest and tell the patients and the public the truth, they can believe us and face, honestly face, the challenges that flow therefrom.

The public is not and should not be taken for fools.

If there are severe shortages of doctors, which there are, then admit it and say so.

If the shortage is due to failure to engage the newly graduated senior house officers, then admit it and let the public know why.

If we were already short-staffed — and still terminated seven physicians — then admit to it and say so.

If recently graduated interns, around 40 were sent home, then admit it and say so.

Let us be honest and admit that the already overburdened health system, caused by nurse and doctor shortages, with the added COVID pandemic has only further strained an overburdened system.

One does not have to be a genius or rocket scientist to figure out that physician shortage affects the delivery of services. This is evidenced in Accident & Emergency and the long wait time to see a doctor. A reduced physician staff means less anesthesiologists to assist in surgeries; less physicians to assist in deliveries, attend to admitted patients — so, the public suffers.

If we were already short of nurses, admit it and say so, for there are fewer wards to transfer patients to and they must remain in Accident & Emergency for an inordinate period of time because we will not bring in retired nurses to staff the wards.

We are always challenged to live up to the dictim “the health of a nation is the wealth of that nation”. These are the issues that need to be addressed for the public, and honestly — not platitudes and public utterances. People’s lives depend on the truth, and a plan to fix what is broken.

Thank you for giving me the opportunity to set the record straight.