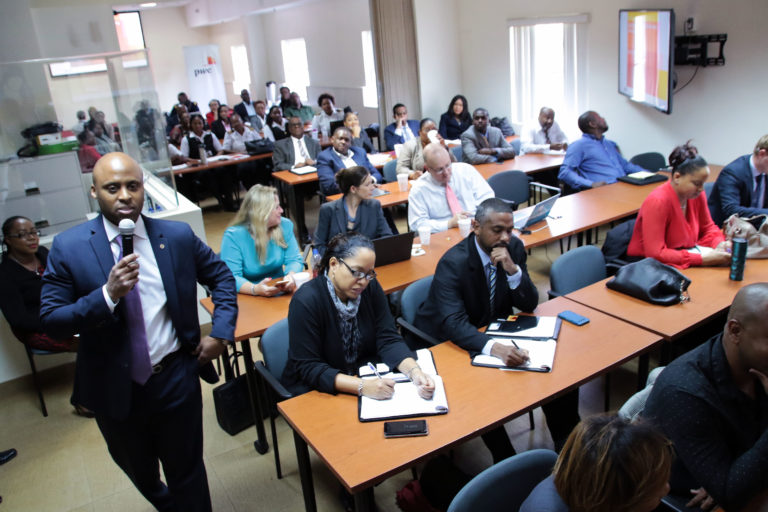 A recent forensic workshop targeting money laundering and terrorism financing is the latest in government’s ongoing efforts to build capacity amongst the country’s regulators to deal with such issues.

The workshop, which was the result of a multi-agency partnership, was intended to enhance the technical knowledge and forensic investigative skills needed to identify and trace the proceeds of crime, and also to effectively investigate and prosecute money laundering, the financing of terrorism and the proliferation of weapons of mass destruction.

It is further anticipated that the training facilitated during the workshop will lead to more effective money laundering investigations and successful prosecutions.

“That’s the key involvement, and not in the traditional way, but to involve what I would describe as non-traditional players,” DPP Gaskin said.

“Once those bodies are made aware of what the money-launderers are doing, they can also adjust their regulation methods and their interactivity with the regulated institutions.”

The training, he said, “empowers all to effectively take off these veneers of legitimacy of the money-launderers – that’s what money laundering is all about, concealing the proceeds of crime.

“Training must not be limited to prosecutors or the police. It must consist of all of the players. This is why you saw such a big group there; all of the persons who regulate, enforce the law, prosecute, need to be around the table talking and building up the network. The experts need to demonstrate what the different typologies are, what methods these persons are using to do whatever they are doing along the money laundering lines, and along the financing of terrorism lines.”

He said there is also a focus on combating the proliferation of weapons of mass destruction, something that some small-island developing states (SIDS) do not focus on enough, but which the relevant international bodies strongly require.

“We want to continue these training exercises by persons who have experience in these areas to impart the required knowledge,” he said.

The AG’s office said it expects to hold more training sessions of this kind to deepen the awareness and increase the skills of all relevant stakeholders.

Kevin Cambridge, Director, PricewaterhouseCoopers (Bahamas) said, “Day one was primarily about investigative fundamentals in terms of forensic investigations and so forth. And so, we had some very interactive sessions during which, we were able to take some of that practical knowledge that we have and share that knowledge and experience with the attendees,”

Cambridge said the firm literally brought in the “who’s who in terms of PwC’s global, regional and local team” to facilitate the workshop.

“Obviously all of these agencies have some very capable individuals doing what they do every day. What we have done, by lending our experiences, is to have fortified and added some muscle to what they do.

“And not only that, with some of our international exposure, we are able to show them, to give them a peek, as to some of what is coming down the pipeline when you talk about counter-terrorism financing, how Block Chain may impact some of the things they may see on a daily basis.”