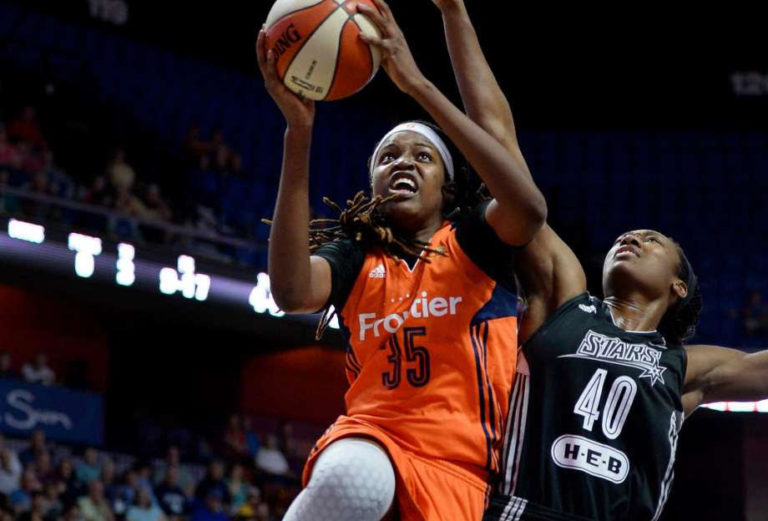 The award was voted on by the 14-media house panel that votes on the league’s weekly awards.

Jones, who got off to a slow start to the season, has come on strong down the stretch for the Sun.

The 6’6” forward was named player of the week for the final week of the season as she averaged 23.3 points, eight rebounds and 3.7 assists to help Connecticut go 3-0 this week. Behind Jones’ play, the Sun secured the fourth seed in the 2018 WNBA Playoffs.

The Sun also earned a first-round playoff bye and will go against the Phoenix Mercury tonight in a second-round single-elimination game 8:30 p.m.

This season, it took Jones a few weeks to adjust to playing with front-court mate Chiney Ogkwumike, who missed all of last season with an ACL injury.

Jones also missed the entire Sun training camp to stay with family in The Bahamas. In the first 15 games, she reached double figures four times. She also had to adjust to coming off the bench, after starting every game last season.

“She is an MVP candidate,” Ogwumike said about Jones.

“She’s fully capable of playing at that level. She has been patient. She has been persistent. We start the game well. J.J. comes in and does her thing. That thing can take us to a whole new level. She is so versatile.

“She does things that guards can’t do sometimes and I know she’s trying to hold herself back, too, because (Connecticut coach) Curt (Miller) is down her neck sometimes. JJ is our X-factor.”

Jones has also expanded her offensive arsenal, adding a long-distance game to the mix. Jones is third in the WNBA in three-point field goal percentage at 44.3 percent.