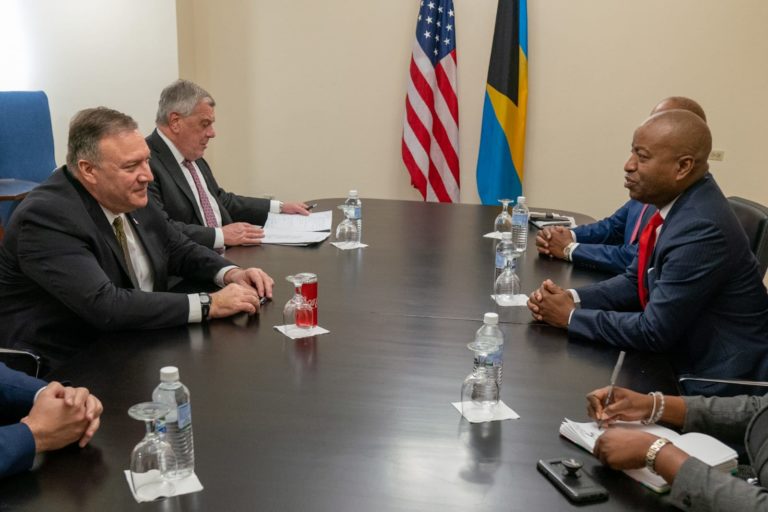 NASSAU, BAHAMAS – Roundtable talks with United States Secretary of State Michael Pompeo and other Caribbean ministers were staged to deepen U.S. ties with the Caribbean and promote democracy and human rights, according to the Ministry of Foreign Affairs.

In a statement yesterday, the Ministry of Foreign Affairs said the talks provided “a platform for discussions on shared democratic values and critical hemispheric matters particularly security, development cooperation, prosperity and human rights.

“Talks also centered on financial services inclusive of black listings and de-risking, youth empowerment, education and the diversification of the Organization of American States (OAS), all crucial to U.S.-Caribbean relations.”

The ministry noted roundtable talks are important platforms for working towards its shared goals with the Caribbean and the United States.

“On the sidelines of the formal meeting, minister Henfield and secretary Pompeo also discussed the humanitarian support that the U.S. provided to The Bahamas post Hurricane Dorian and rebuilding efforts,” the statement continued.

“During the talks, minister Henfield conveyed the gratitude of the Bahamian people, particularly those from Abaco and Grand Bahama, for the solidarity and support of the United States which has provided safe harbour and aid to some 400 persons as well as $34 million in humanitarian assistance for The Bahamas.

“His ninth visit to the ‘region’, secretary Pompeo noted that this special visit represented President Trump’s resolve to deepen the United States’ relationship with the Caribbean and promote democracy and human rights.”

In the days leading up to the meeting, CARICOM chairman and Barbados Prime Minister Mia Mottley characterized the talks as an attempt to “divide the region”.

Mottley confirmed that her country would not that meeting, and her position was supported by Trinidad and Tobago Prime Minister Dr Keith Rowley.

“As chairman of CARICOM, it is impossible for me to agree that my foreign minister should attend a meeting with anyone to which members of CARICOM are not invited.

“If some are invited and not all, then it is an attempt to divide this region.”

The meeting comes almost a year after Prime Minister Dr Hubert Minnis joined other Caribbean leaders from the Dominican Republic, the Republic of Haiti, Jamaica, and Saint Lucia, for a multilateral meeting with U.S. President Donald Trump at his Mar-a-Lago estate in Florida.

The March meeting was billed as an effort to strengthen security cooperation and counter China’s “predatory economic practices” in a White House statement.