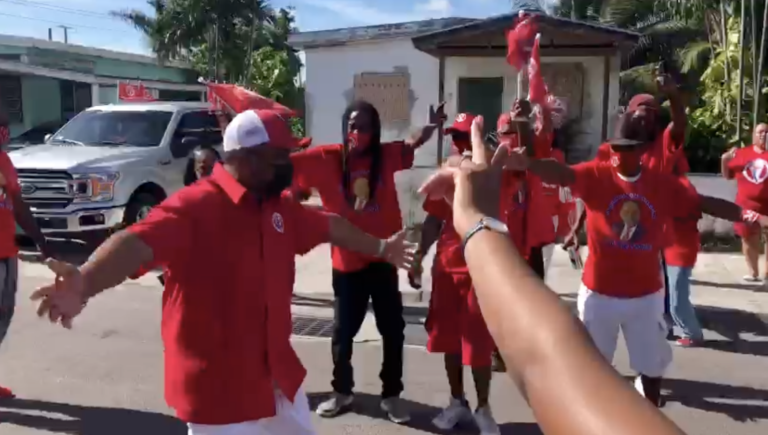 NASSAU, BAHAMAS — Despite the gathering of hundreds of politicians and political party supporters on Nomination Day on Friday, Health Minister Renward Wells said there is no concern the day could be a superspreader event.

Wells spoke to reporters on the sidelines of the Free National Movement’s (FNM) first drive-in rally on New Providence on Saturday and was asked about the large gatherings around New Providence the day before.

“There were campaigns where some were responsible and responsive and there were those where when individuals came out, they had to deal with the circumstances that they found,” he said.

“At the end of the day, you had campaign teams that were usually together…”

Despite COVID-19 protocols that stipulate only five fully-vaccinated people may campaign in a group, the day was marked with multiple political candidates coming out with large contingents.

Eager supporters, many of whom were wearing masks, danced in the streets in candidate paraphernalia, shouting party calls. Little to no social distancing was observed at several of the sites.

Wells acknowledged there was a “whole lot of excitement” on that day, but claimed that he went in to nominate with five people but came out to at least 20 different people waiting.

“I was a little surprised by the grouping of PLP (Progressive Liberal Party) that chose to show up at the same time,” he said.

“I think that was more of a plan because that happened in almost every circumstance where there was a Free National Movement member who was nominating — the PLP sought to come immediately after.”

On Friday, Wells led a motorcade of supporters — including FNMs in cars, on big trucks and motorcycles, and even a man on stilts and someone dressed as popular Sesame Street character Elmo — to Carlton Francis Primary School.

That sizeable group of supporters gathered outside the school as they waited for Wells to complete his nomination.

Moments later, PLP Bamboo Town candidate Patricia Deveaux arrived with over a dozen vehicles of PLP supporters, who chanted the party’s slogan and rallied outside of the school.

Asked whether he is concerned Friday’s events could be superspreaders, the health minister said there is a “potential” for that where there was a “breakdown in protocols” in some of the campaigns.

He insisted, however, that the government has managed the previous surge in cases and is moving forward with its aggressive vaccination program.

He said “Nomination Day has passed now” and the Minnis administration is now looking forward to the advance polls with hopes the Bahamian people will continue to adhere to the protocols.

“We are going to end up in a good place should the Bahamian people and all of us continue to adhere to the protocols,” he said.

Police Staff Association (PSA) Executive Chairman Sonny Miller said yesterday that the association is concerned about the possible spike in COVID-19 cases in the run-up to the September 16 Election Day.

“We are expecting these major political parties to follow the protocols and the guidelines,” he told Eyewitness News.

“The more they gather together, it causes us to have to go into those environments and it’s putting us and our families at risk.

“That is a concern for us and…we are praying that everything runs smoothly from next Election Day and our members will return home safely.”