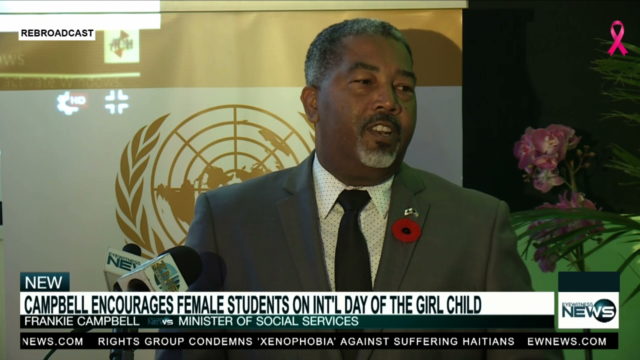 Recognizing the rights of girls and the unique challenges that they face around the world, yesterday, October 11 was recognized as International Day of the Girl Child.

According to the United Nations official website, back in 2011, the United Nations General Assembly adopted the resolution 66/170 to declare October 11 as the International Day of the Girl Child. The day focuses attention on the need to address the challenges girls face, and to promote girls’ empowerment and the fulfilment of their human rights.

Locally, the Ministry of Social Services and Urban Development, in conjunction with the Adventure Learning Center, hosted a summit for girls under the theme, “Girls Speak Out.”

Dozens of female students from public and private schools attended the summit.

Minister of Social Services and Urban Development, Frankie Campbell, who shared some advice with the female attendees, told the girls that it was important to reach their full potential.

“I am asking you and challenging you to unleash that potential,” Campbell said.

Campbell also encouraged the female students not to settle for any less than they deserve.

“Do not settle for the young man who feels he is coming to school just to mess around and his grades do not matter.”

Campbell said that he had to encourage girls this way because has three girls of his own.