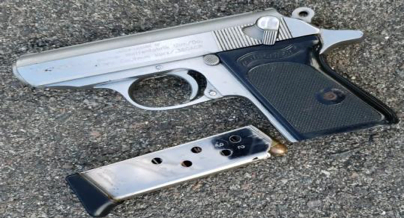 NASSAU, BAHAMAS – Police were successful in removing another illegal firearm from the streets of the capital on Saturday, May 25, 2019.

According to police reports, shortly after 5:00p.m. on Saturday, Drug Enforcement Unit (DEU) Officerswere on patrol on an unnamed road off Faith Avenue, when they observed a group of men standing on the side of the road.

The men, upon seeing the officers, began acting in a suspicious manner and ran from the area, making good their escape.

Officers conducted a search of the area and recovered a .380 pistol and one round of ammunition.