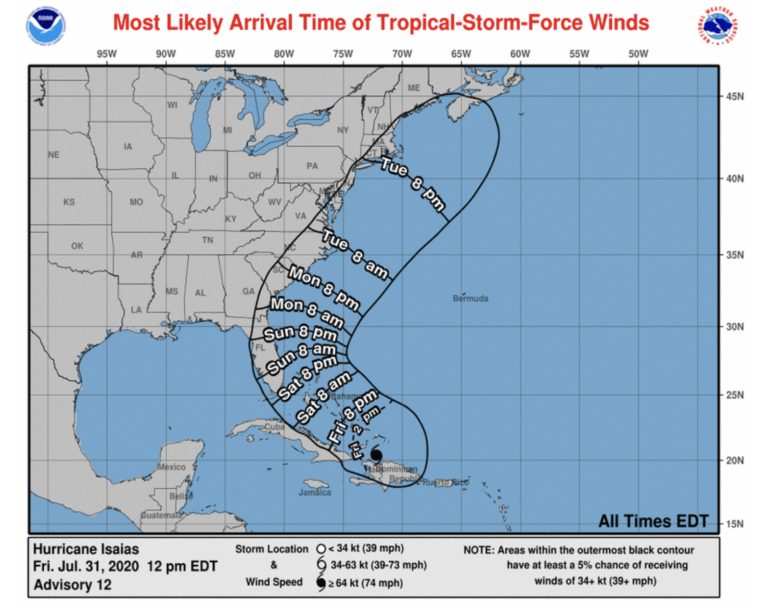 NASSAU, BAHAMAS — Isaias formed into a hurricane overnight with maximum sustained winds of 80mph, according to the National Hurricane Center.

Around 2am, the National Hurricane Center issued a warning to the northwestern, southeast and central Bahamas as the Category 1 storm moves closer to Great Inagua.

The southeast islands include Acklins, Crooked Island, Long Cay, the Inaguas, Mayaguana, and the Ragged Islands;

The NHC advised that the center of Isaias will move near or over the southeastern Bahamas overnight.

The storm is forecast to be near the central Bahamas Friday night and move near or over the northwestern Bahamas and near South Florida on Saturday.

Maximum sustained winds remain near 80 mph with higher gusts and the possibility of some strengthening throughout the day.

Isaias is expected to remain a hurricane for the next few days, according to the NHC.

A “dangerous” storm surge in the central and northwest Bahamas is expected to raise water levels by as much as 3 to 5 feet above normal tide levels.

A storm surge is in the southeastern Bahamas is expected to raise water levels between one and three feet.

Isaias is expected to produce four to eight inches of rain through Friday night.

Director of the Department of Meteorology Trevor Basden warned last night the formation of the storm was “not usual, but it happened”.

Basden forecasted that Isaias will bring “lots of rain”, and most of the streets of New Providence will see flooding or “localized ponding”, particularly in low-lying areas.

Asked whether meteorologists were more concerned about the wind or rain, he noted that both the wind and rain were concerning, noting that all hurricanes are considered “beast of beasts”.

National Emergency Management Agency Director Captain Stephen Russell advised that after contact with all Family Island administrators, all those islands were prepared.

He said the emergency operations center has been mobilized and will recognize COVID protocols.

Russell said there were no plans for evacuations from the islands, but in Salina Point Acklins and Andros, residents were encouraged to move from the lower coast more inland.

NEMA has placed food of ships that can be taken into impacted areas if the need arises, he advised.

All the shelters in New Providence will be opened by 9 am today.