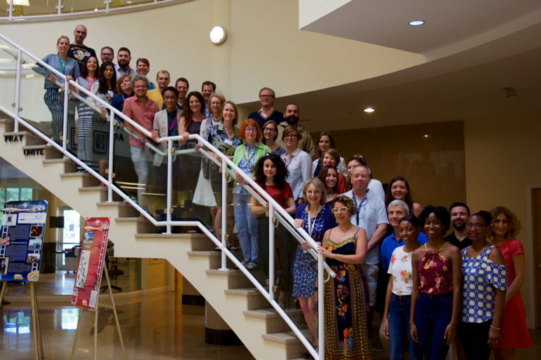 Photo 1: Participants of the HoMER Conference cascade the stairs the Harry C. Moore Library and Information Centre for a group photo.

NASSAU, BAHAMAS – The HoMER (History of Movie Going, Exhibition and Reception) Conference, recently held at University of The Bahamas (UB) under the theme ‘Anchoring New Cinema History’ has been credited with expanding the base of knowledge on cinema history.

Daniela Treveri Gennari, one the HoMER conference coordinators, said the intention was to move beyond the focus on film history to include matters relating to cinema more broadly.

“This really means moving beyond the action into the distribution of film, the circulation of films, the exhibition of films and the reception, so looking at all audiences, which is something that for many years has not been done and [has been] neglected to a certain extent,” Gennari said.

“Now we’re trying to reposition the audiences within film studies in a sort of strong place.”

Pre and post-conference activities included a cinema exhibition in the foyer of the Harry C. Moore Library and Information Centre, entitled ‘Big Screens in Little Nassau in the 1950s’, which was on display from June24 to July 1 and was curated by Monique Toppin, the local conference coordinator.

Toppin is an assistant professor in communication and creative arts at UB.

“I got involved in HoMER about three years ago when I had the opportunity to present a paper at the NEXT Conference, which is a thought leadership conference in Germany,” she explained.

“I met Daniela and other HoMER members who proposed the idea of hosting HoMER in The Bahamas while I was pursuing my doctoral studies and I was thrilled with the idea. At last year’s conference in Amsterdam, they had to decide where the next conference would take place and The Bahamas won the bid against countries like Turkey and Ireland.”

The conference covered the history of cinemas in the context of:

HoMER was founded in 2007 at a conference in Belgium of international cinema scholars.

The program aims to promote an understanding of the complex, international phenomena of film going, exhibition and reception through research collection and the creation of a portal website to make new databases searchable and the dissemination of new models of collaborative research and support for a variety of means of publishing research findings.

Gennari also noted the importance of the conference held recently in The Bahamas.

He said, “It is important to be in The Bahamas because the idea that we had for HoMER was to expand the geography of the research and to really explore uncharted territories in research of the history of cinema.

“…Being in The Bahamas really sends a big signal of trying to be inclusive, not just from having researchers from other parts of the world but also having research projects that look at areas that have never done this kind of research before.”