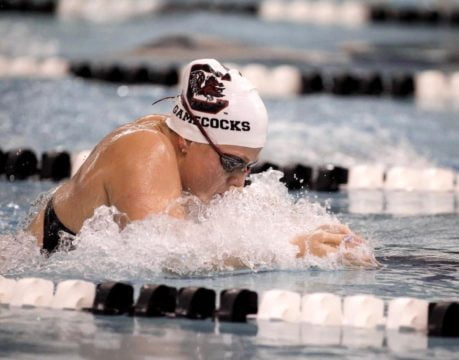 NASSAU, BAHAMAS- Bahamian swimmer Albury Higgs has now graduated with an undergraduate degree and is pushing full steam ahead to swim at the Summer Olympic Games in Tokyo, Japan, which is now scheduled for 2021.

Higgs graduated from the University of South Carolina with a bachelor’s degree in Public Health and is undergoing an internship part-time, in Columbia, South Carolina. She was a remote guest on the Sports Nation live sports show, hosted by Jamaican Leighton Levy, on NationWide 90FM radio station in Kingston, Jamaica, over the weekend. Higgs is seeking to qualify for the Olympics in the 100 and the 200 meters (m) breaststroke events, but is focusing mainly on the 200m breast.

“With regard to preparation, I am just trying to stay flexible this upcoming year. We are trying to see which meets we are going to be able to attend. Most meets are in the winter and spring and I am trying to focus on hard training in the training block right now. I am also trying to stay patient with the unexpected in terms of what is going to happen with meets and controlling the things that I can, like training to the best of my ability, right now,” Higgs said.

Higgs and three other Bahamian swimmers are looking to qualify and are close to their respective marks – Joanna Evans, Jared Fitzgerald and Izaak Bastian. Laura Morley has achieved the ‘B’ cut standard in the 200m breast and will look to achieve the ‘A’ standard.

Higgs is currently training with a group in South Carolina that is geared toward Olympic qualification. They sometimes simulate race days by swimming in the mornings and afternoons.

“For us, we specifically plan days that we are going to put on suits and race like we have a meet. Some will be in the mornings and some will be in the afternoons. We try to practice at both times as the prelims and the [finals]. We try to be [as] professional as we can, so that we can replicate the atmosphere at a meet,” Higgs said.

Higgs has not swum in a competition since mid-March, when the National Collegiate Athletic Association (NCAA) decided to cancel its remaining sports. In her final year, she qualified for the NCAA Division I Swimming Championships but did not get to compete because of the COVID-19 pandemic. This has been her longest break from swimming, since she began swimming competitively.

“The year has been very weird for me,” Higgs said. “With me taking the first long break from swimming that I have [had] since I started competitive swimming, I realized that it was actually needed. Since I started swimming post-college, I have enjoyed it so much. The scheduling is quite similar but the group that I am training with now, we all have the same goals, which is trying to make the Olympics. Everyone is focused on the training. We do not have to deal with as many distractions as we would normally have as a collegiate athlete. Not having schoolwork to deal with is a nice change because I can focus more on training and swimming.”

The Bahamas Aquatics Federation’s (BAF) 2020 National Swimming Championships were slated for June, but like other meets in The Bahamas, it was put on a hiatus as the country and the world battles with the COVID-19 pandemic. One of her best events at the meet, for years, was the 100m breaststroke. She has been dominant in that event at the nationals over the years. She was looking forward to coming home and competing.

The meet was set to be one of the final Olympic qualifying meets.

“It was definitely helpful in adjusting and knowing what works and what does not work. I think I went like a week early but for the Olympics, it might be more. Both of those meets were great and whenever I go to those international meets, I always learn something.”

She said that competing back-to-back in the world swimming championships and the Pan Ams was physically hard and demanding, particularly with the travel, but she adjusted.

Higgs is making a decision on grad school and is using this year to see what she wants to pursue for her master’s degree.