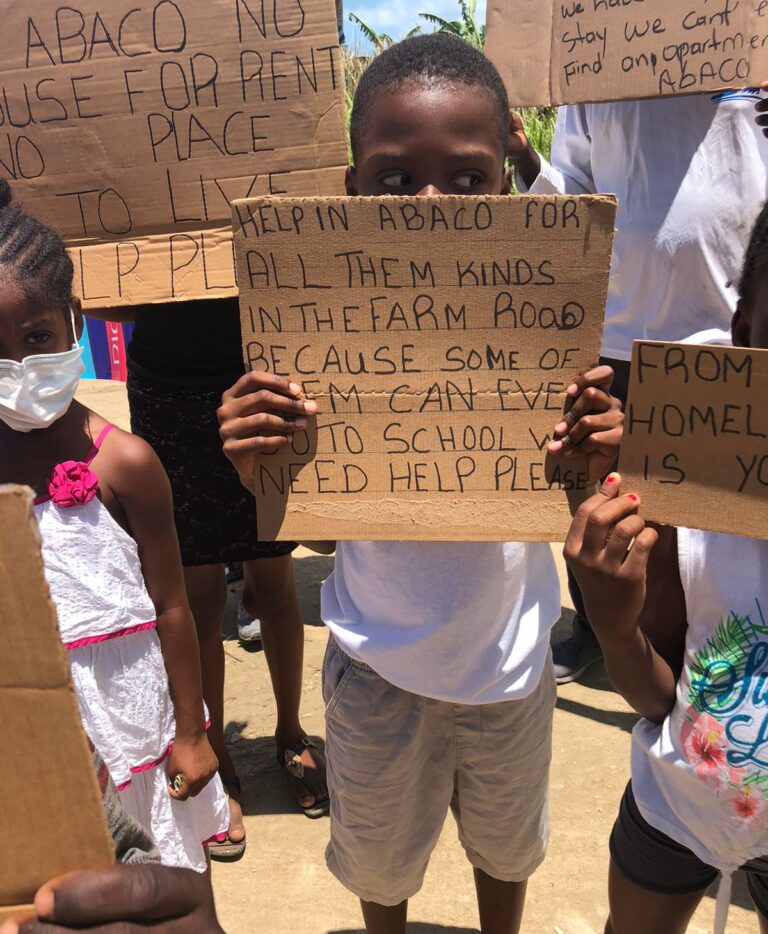 A group of residents from the Farm shantytown on Abaco demonstrate against the government’s demolition of their homes on Saturday, May 29, 2021, as a United Nations delegation toured the island.

“Stop this senseless, heartless and illegal action that is being driven by xenophobia and discrimination”

ABACO, BAHAMAS — A group of residents from The Farm shantytown on Abaco demonstrated on Saturday against the ongoing demolition of their homes, calling for the United Nations (UN) to take urgent action on their behalf to stop the government from continuing with its plans.

Several children and residents held placards that read: “No shelters in Abaco, we have no where to go”, “From Dorian to Homeless. Where is your heart” and “Abaco have a housing issue, we are homeless”.

However, as residents gathered and demonstrated, police and immigration officials reportedly canvassed the area.

One resident told Eyewitness News it felt like an intimidation tactic.

The residents of The Farm reportedly sent correspondence to the Cabinet Office and law enforcement for permission to demonstrate, however, they never received any response.

Human Rights Bahamas criticized the government for failure to approve the group’s right to assembly, indicating their failure to respond was a denial of the applications.

The demonstration came as a United Nations (UN) delegation toured the island after visiting the Carmichael Road Detention Centre on Friday amidst ongoing concerns at the New Providence facility and migration and housing concerns on the Dorian-decimated island.

Residents presented UN officials with a letter outlining their plight and the challenges of dislocated victims of Hurricane Dorian.

The letter, dated May 29, expressed how happy the residents were that the international body was able to “witness firsthand the treatment and conditions we have suffered ever since being made homeless by the storm in September 2019”.

The residents explained that after losing everything in the storm, they tried to re-establish their homes and live but were “intentionally targeted and subjected to systematic persecution at the hands of The Bahamas authorities”.

The letter described how in February 2020, the remaining structures in those communities that had been spared extensive damage “were fenced in to block access by residents, then summarily and arbitrarily demolished and the remains, including all of our personal property, were disposed of against our will”.

Residents said since many people lost all of their savings, belongings, travel and other documents, some have no way of proving their identity and may be rendered stateless.

While some families have sought to rebuild, those new homes, which are considered the only shelter for their families and children, have again been targeted for “arbitrary demolition” amidst a chronic housing shortage on Abaco.

The letter noted that on April 22, 45 structures in the community were destroyed, leaving an unknown number of people homeless, and another 11 homes were demolished on May 15, leave some 40 more people homeless, including 10 children.

Should the government proceed with its intentions, up to 1,000 people will be displaced, among them being hundreds of children, many with disabilities, according to the residents.

They insisted that in the demolition exercise, they have not been afforded due process as mandated by Bahamian law and were collectively accused of various violations of construction regulations without regard to the individual merits of each case.

They further claimed that senior officials have sought to conflate the issue with undocumented migration, even though “the vast majority of members of our communities are citizens of The Bahamas or have some form of legal status”.

The group accused the government of utilizing tactics to incite and inflame public opinion against them.

“We feel that we have been specifically targeted because many of the people in our communities are of Haitian ethnic background,” the letter read.

It added: “Our communities have been the target of clear-cut discrimination at the hands of the authorities, who have previewed their intention to demolish hundreds more homes, and ordered us to find alternative housing. However, our plight has been compounded by discrimination on the part of Bahamian landlords, who have refused to rent to us.

“We have been targeted, stigmatized, marginalized and pushed into a corner. There is nowhere else for us to go. We live in constant fear that the authorities will return any day with their machine guns and bulldozers and force our families into the bush.”

The letter requested the UN delegation to “do everything in its power to raise awareness of our urgent plight on the international stage”.

“We are in desperate need of any assistance that may be available,” the residents said.

“In particular, we ask that you intervene with the government of The Bahamas and ask that they stop this senseless, heartless and illegal action that is being driven by xenophobia and discrimination.”

This is disgusting. How long has the government been giving you time? Why don’t you talk about how the government told you not to rebuild on the stolen property? Why not mention that it isn’t your land to build on then wonder why the citizens don’t like you? You are blatant thieves who are too entitled. Why not use your money like everyone else to buy land ? I hope they said each one of your ungrateful hips back to Haiti! And talk about discrimination? If Bahamians were so discriminatory, you wouldn’t be allowed to use our public schools FREE, our public clinics and hospitals FREE, have Haitian flag day and allowed to have so many kids although your plight is that you are poor! The Bahamas has given you so much and this is the thanks we get? These immigrants only care about destroying The Bahamas.