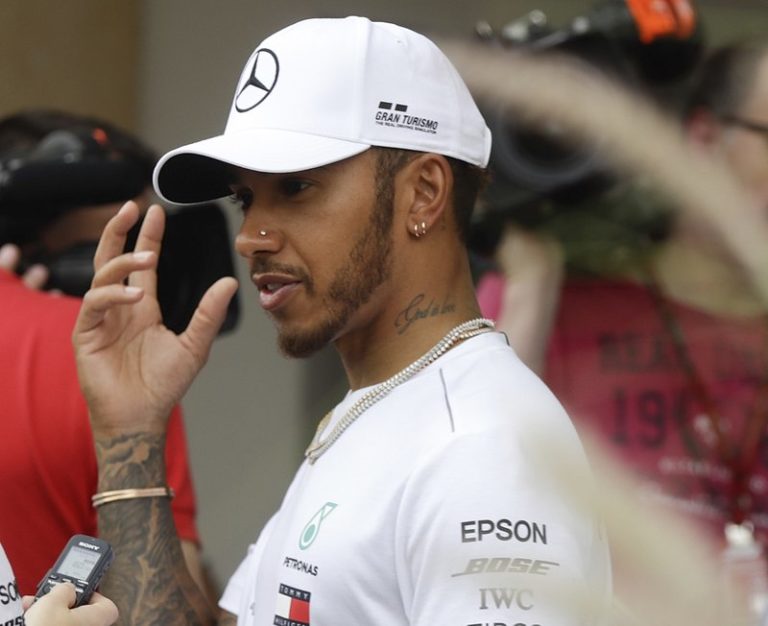 Mercedes driver Lewis Hamilton of Britain gestures as he answers to reporters at the Formula One Bahrain International Circuit in Sakhir, Bahrain, Thursday, April 5, 2018. The Bahrain Formula One Grand Prix will take place here on Sunday. (AP Photo/Luca Bruno)

SAKHIR, Bahrain (AP) — World champion Lewis Hamilton will keep a close eye on Formula One owner Liberty Media’s proposed talks with the teams on Friday because his next contract could be shaped by what happens.

U.S.-owned Liberty took over after Bernie Ecclestone’s 40-year reign ended last year. F1′s managing director of motorsports Ross Brawn has the task Friday of presenting the ownership’s plans beyond 2020 when the current rules — known as the Concorde Agreement — expire.

Hamilton’s Mercedes contract runs out this year, and he is keen to know more about Liberty’s vision before he signs a new one.

“Potentially there’s some sort of announcement, or discussions, with what’s happening with Formula One moving forward,” the four-time champion said at the Bahrain Grand Prix Thursday.

“It’s always good to wait to hear some of those. (They) could or could not have an impact on decisions you make in terms of length (of contract).”

Although F1 has not commented specifically on the blueprint, it revolves around more equal prize money, slashing budgets of big teams, introducing cheaper engines to minimize the performance gaps and standardizing technical rules to increase competition.

“The next contract is probably the most important one of my career. Ultimately you want to have all the information so that you can make the most knowledgeable decision,” the 33-year-old Hamilton said.

“Maybe it affects the driver market, maybe it doesn’t. It’s actually come at a pretty good time as I haven’t actually put pen to paper.”

Mercedes has won the past four drivers’ and constructors’ championships while Red Bull did so with Sebastian Vettel driving from 2010-13.

“If you watch a race of IndyCars or whatever, that unpredictable result until the last 10 laps makes you excited,” two-time champion Fernando Alonso said.

“We can put (down) the (F1) qualifying order for this race right now and that’s a little bit sad.”

“The biggest problem is there are so many people making the decisions. I’ve talked to people high up who have absolutely no idea what it means to be a racing driver, or a team, or a designer, and others that do understand it, like Ross,” Hamilton said.

“At least they’ve got some people there who do understand it and hopefully we’ll move in the right direction.”

Mercedes head of motorsport Toto Wolff said teams have a responsibility to try to overcome their differences in the face of a threat by Ferrari to quit.

Ferrari chairman Sergio Marchionne is unhappy with the proposals to simplify engines and redistribute prize money.

F1 cars use 1.6-litre V6 turbo hybrid engines. According to media reports, F1 and governing body FIA agree on a simpler model which reduces costs. But this would impact on the hybrid system, which recovers energy from the turbo and makes Mercedes and Ferrari so powerful.

Amid so many competing agendas, optimism is low.

“Trying to get a consensus between teams that have varying objectives, different set-ups, is going to be impossible,” Red Bull team principal Christian Horner said. “It’s history repeating itself.”

Drivers, who have minimal input, are also divided.

If they could write down ideas on a blank sheet of paper, Hamilton said, “there would be some who say they’d like it futuristic like Formula E, and drivers like me who say they want a V12 (engine) and a manual gear box.”

“Liberty should just do their own research and not listen to the drivers,” he said. “Because drivers will just say what’s in their best interests.”

“What’s the point for me, to give you a list, because in the end I have zero power?” he said. “We can’t, we don’t make the rules.”

This article was written by JEROME PUGMIRE, Associated Press writer.