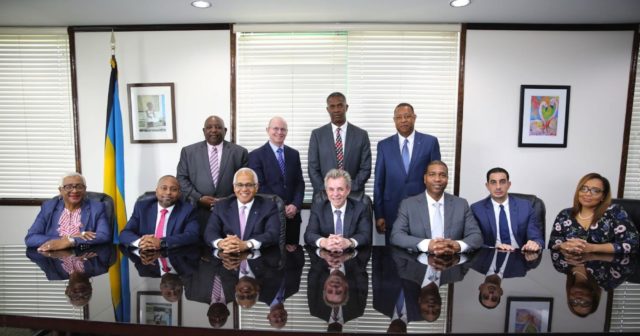 GOVERNMENT AND BOARD – Minister of Tourism, the Hon. Dionisio D’Aguilar (seated third left), along with Minister of State for Grand Bahama, Senator Kwasi Thompson (seated second left), was joined by Michael Scott (seated centre), chairman of Lucayan Renewal Holdings Ltd.; Russell Benford (seated, third right), vice-president of Government Relations/Americas for Royal Caribbean; Mauricio Hamui (seated second right), chief executive officer of ITM, along with Board Members of Lucayan Renewal Holdings (standing) for LOI signing for the purchase of the Grand Lucayan resort, in the Office of the Prime Minister on Wednesday, March 27, 2019.

NASSAU, BAHAMAS – More than six months after purchasing the Grand Lucayan Resort in Freeport, Grand Bahama amid controversy, the government yesterday took a firm step toward the sale of the property, signing a letter of intent (LOI) with Royal Caribbean Cruises (RCC) Limited and Mexican port developer ITM Group to purchase the resort for $65 million – the government’s purchase price from Hutchinson Whampoa.

In a statement from the Office of the Prime Minister, Grand Bahama, the government said its special purpose vehicle signed the LOI to begin exclusive negotiations for the purchase of the resort and the redevelopment of the Freeport Harbour.

Those negotiations, which are expected to lead to a heads of agreement, will begin immediately, the government said.

The government said key among those negotiations will be Bahamian employment requirements and Bahamian participation in specific areas, including “significant ownership participation in restaurants, retail stores, transportation and watersports”.

“The proposed joint-venture project between RCL/ITM will include the redevelopment of the Grand Lucayan Resort into a world-class destination, featuring water-based family entertainment, with dining, gaming and entertainment options, and five-star hotel accommodations,” the government said.

“Phase one of the proposed development represents a projected $195 million investment over a 24-month period.

“Approximately 2,000 jobs are expected to be created in the first phase of the project.”

According to the government, there were 62 expressions of interest and 11 letters of offer for the purchase of the property.

It said the board of the SPV, Lucayan Renewal Holdings Limited, unanimously approved a resolution last Friday to recommend to Cabinet that the government sell the resort to RCL/ITM.

When asked outside the Churchill Building Tuesday, whether the government planned to announce the preferred bidder sometime this week, D’Aguilar said, “That may be a little premature”.

“The government obviously is in negotiations; I don’t think that is in any secret,” he told the media.

“When these negotiations will be completed and when we will be able to make an announcement is still unknown, but we remain hopeful and encouraged.”

Yesterday, D’Aguilar said, “It is my sincere hope that Bahamians and in particular, Grand Bahamians, will take advantage of the opportunities being created not only for employment, but for self-employment.

“I want to see young people achieving their dreams of owning a business that will serve the visiting public as well as Bahamians.

RCCL CEO and President Michael Bayley, who was also quoted in the statement, said the redevelopment of the Grand Lucayan resort has “tremendous potential to significantly increase tourism to Grand Bahama”.

“Royal Caribbean is committed to working closely with local partners to create a transformational experience for visitors,” Bayley said.

“We thank our partners at ITM and the Government of The Bahamas for their support and collaboration as we work towards this exciting opportunity.

The ITM Group said it is committed to co-develop with RCL “a world-class destination and a leading cruise port hand-to-hand with The Bahamas government”.

RCCL and ITM Group partnered in a bid to acquire the Grand Lucayan in addition to developing a water-based theme park around the resort and the Freeport Harbour.

The government, prompted into action by the failed deal and what it said was an urgent need to save the economy of Grand Bahama, purchased the resort last year for $65 million, with $30 million paid up front.

The Lighthouse Pointe is the only property of the three brands which reopened after the resort close its doors following Hurricane Matthew in October 2016.

According to the government, it would take $39 million to renovate the three hotels.